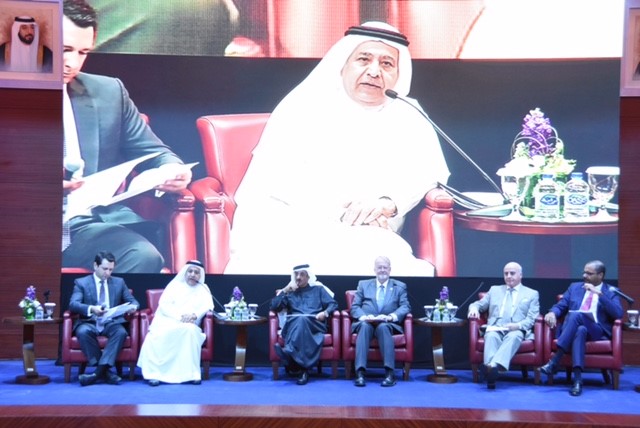 Sharjah Chamber of Commerce and Industry organized, in cooperation with the University Leadership Consortium, and BUNYAN Initiative for the Capacity-Building of Emirati Youth, the second edition of the Leadership and Entrepreneurship Forum under the banner “Entrepreneurship and the Promising Models for Success in the UAE” which aimed at the “fruitful communication in the Service of the Nation” at Sharjah Chamber’s headquarters, an event that was attended by an elite group of university presidents and senior officials from government and economic authorities in the UAE, and leading academic institutions, stakeholders and businessmen, and Abdullah Sultan Al Oweis, Chairman of the Board of Sharjah Chamber, board members, HE Khaled bin Butti Al Hajeri, Director General of Sharjah Chamber, in addition representative of companies from the private sector, and leaders from the industrial sector.

Participants in the discussions that took place praised the leading role played by the government of the UAE in supporting youth and enhancing their energies, through legislation and facilities, to enable youth to take up their role in building and development, ensuring a promising future for the nation.

Various specialists in economy and investment praised BUNYAN initiative, launched by His Excellency Sheikh Nahyan bin Mubarak Al Nahyan, Minister of Culture and Knowledge Development, that provides the best approved venues to support youth, develop their expertise and invest their energies, which will reflect positively on the future of the UAE.

Abdullah Sultan Al Oweis, Chairman of Board of Sharjah Chamber, said that Sharjah, under the leadership of His Highness Sheikh Dr Sultan bin Muhammad Al Qasimi, Member of the Supreme Council and Ruler of Sharjah, has always supported youth and enabled them to unleash their creativity and full potential to serve their nation, to deliver great performance and innovate effective solutions to all changes that may face the community.

Al Oweis added that many achievements have been made during the period from last year to this year’s meeting, which has become one of the most important annual activities. These accomplishments will enhance the presence and participation of youth in the business sector and decision-making, with the establishment of Emirates Youth Council, the launch of many supporting initiatives, and expanding partnerships with government entities.

Al Oweis said that there are now 77 universities in the UAE and thousands of graduates every year. More initiatives should be launched to increase the country’s human resources by selecting the disciplines in demand by the labor force.

Al Oweis pointed out that the presence of the youngest cabinet member in the world in the UAE will motivate young people who play a key role in developing the economic sector in the country. Therefore we should support and nurture youth and invest in developing their potential. Youth are the future of this country and we count on them.

To conclude Al Oweis called for launching more initiatives to support young entrepreneurs in training and finance. Sharjah Chamber of Commerce and Industry’s support for Emirati youth will continue to assure this country’s role in leadership and innovation.