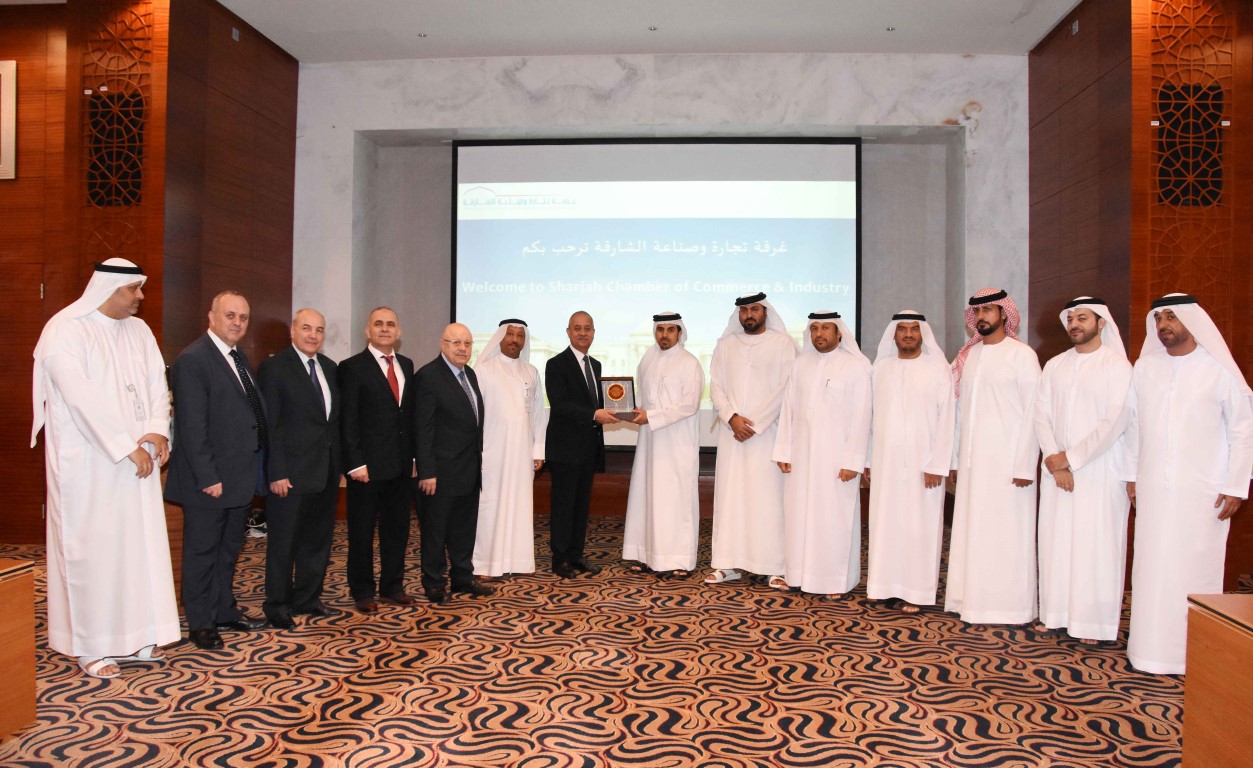 His Excellency Abdullah Al Oweis, Chairman of Sharjah Chamber of Commerce and Industry, praised the strong economic and commercial relations between the United Arab Emirates and the Hashemite Kingdom of Jordan, and the attention given by the leadership of both countries to developing their different sectors and enhancing mutual work and serving the business community in both countries.

This came during the meeting for consultation held recently by businessmen from Sharjah and Jordan at Sharjah Chamber’s headquarters, with the participation of a Jordanian delegation from the Jordan Chamber of Commerce, and from the Emirati side Sheikh Majid bin Faisal Al Qassimi, First Deputy of Chairman of Sharjah Chamber, HE Waleed Abdulrahman Bu Khatir, Second Deputy of the Chairman and members of the board of Sharjah Chamber.

The meeting started with a tour of the permanent exhibition of local industrial products that showcases more than 100 products chosen from 2200 factories based in Sharjah, during which the visiting delegation was briefed on the most important services provided by Sharjah Chamber to facilitate the business sector’s activities.

The two sides discussed developing economic and commercial relations between Sharjah and Jordan and enhancing trade between them and entering into beneficial partnerships in the vital sectors, and viewed the huge achievements made, and enhancing them with new projects in a good environment for investment, with advanced infrastructures, a system of modern economic legislations, and opportunities for investment in various sectors.

The two sides discussed establishing and organizing the “Jordanian Week in Sharjah” to encompass cultural, economic and commercial events, and showing Jordanian industrial products to introduce them to Emiratis and residents of Sharjah, and show the huge development achieved by the  Jordanian industries in the past few years.

The two sides called for intensifying visits by commercial delegations, activating cooperation agreements and trade, and increasing coordination between Sharjah Chamber and Jordan Chamber of Commerce to show the business sector in Sharjah the huge opportunities for investment in Jordan by organizing events.

The meeting showed a film about Sharjah and development achieved economically, commercially, culturally and in tourism and real estate.

HE Abdullah Al Oweis stressed during the meeting that Sharjah provides huge facilities for Jordanian businessmen who wish to invest in Sharjah as an outstanding destination for investment for its diverse economy, stability, distinct geographical location, legislation and regulations, government facilities, free zones, modern ports and promising opportunities for investment.

His Excellency praised the Jordanian community in Sharjah’s workforce as highly qualified and trained, in addition to Jordanian businessmen who run their businesses in Sharjah, taking advantage of a wide array of facilities provided for the business sector, and he stressed the importance of participation by Jordanian businessmen in the coming economic events to be hosted by Sharjah and opening new horizons for them, including Expo Centre Sharjah.

For his part HE Ghassan Kharfan, First Deputy for the Chairman of Jordan Chamber of Commerce, expressed his gratitude for Sharjah Chamber for the warm welcome, and praised the vital role played by the UAE in supporting the economy of Jordan through many large projects it carries out in Jordan.

HE Ghassan Kharfan spoke in detail about the economy in Jordan and the comprehensive reform it’s going through to enhance competition, which has created a good quality environment for all sectors including the industrial and the banking sectors, which has had a huge effect on the Jordanian economy, and he called on businessmen in Sharjah to take advantage of the huge opportunities for investment in the Jordanian market and the incentives provided for Emirati investors.