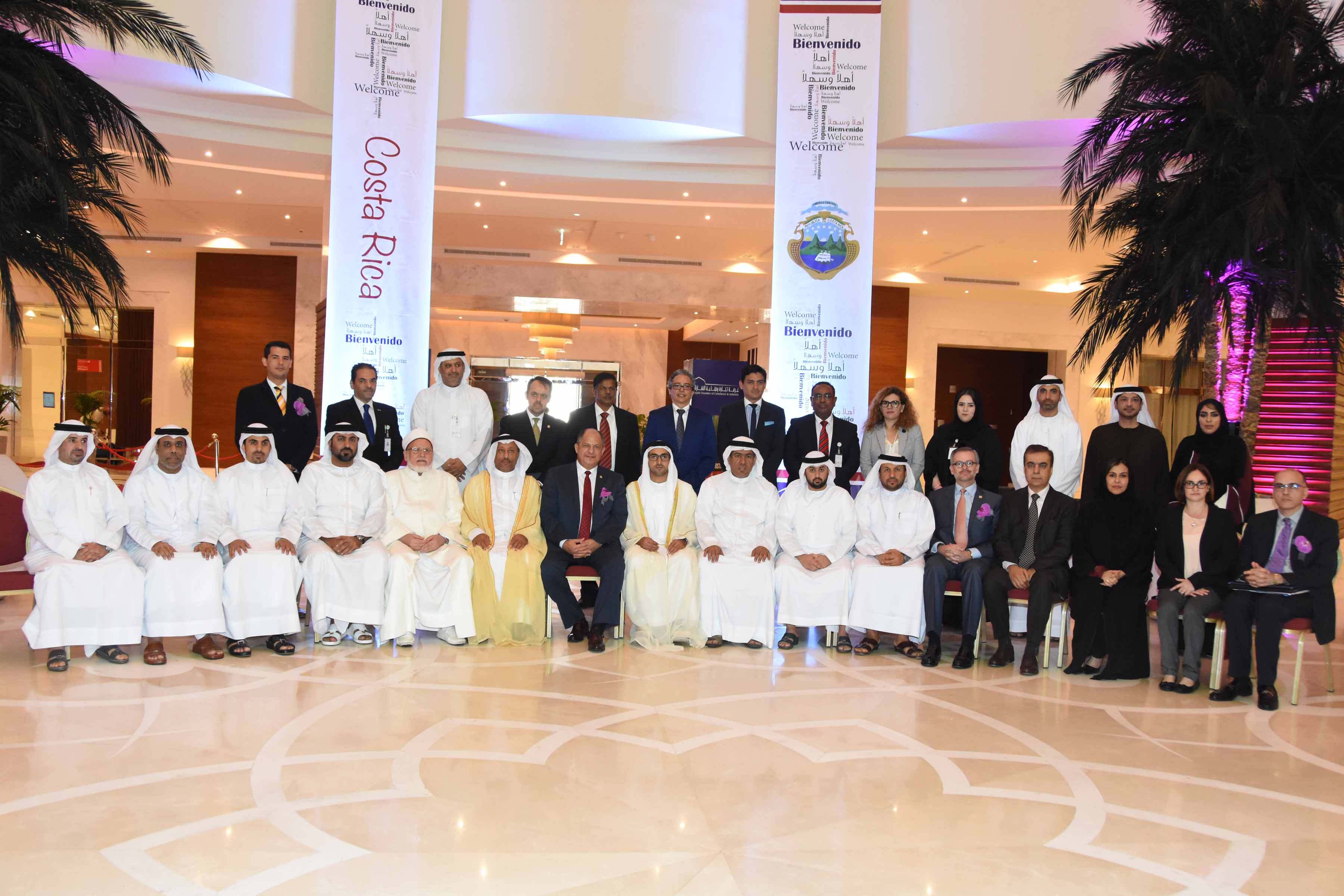 The meeting was attended by Sheikh Fahim bin Sultan Al Qasimi, Chairman of the Department of Government Relation in Sharjah, Sheikh Mohammed bin Humaid Al Qasimi, Director of Department of Statistics and Community Development (DSCD), H.E. Abdullah Sultan Al Owais, Vice President of the Federation of UAE Chambers of Commerce and Industry and Chairman of Sharjah Chamber of Commerce and Industry (SCCI), Sheikh Majid bin Faisal Al Qasimi, First Deputy Chairman of SCCI, along with an array of senior government officials in Sharjah, and H.E. Khaled bin Butti Al Hajri Director General of SCCI, in addition to a number of senior officials in the Chamber.

The meeting witnessed the signing of a Memorandum of Understanding between SCCI and the Costa Rican National Agency for Export Promotion (PROCOMER).  This comes in line with both sides’ keenness to boosting cooperation, and commercial relations.

The Costa Rican delegation comprised of a number of senior government officials including Costa Rica’s Ministers of Foreign Affairs, Exterior Trade and Environment & Energy, in addition to heads and representatives of various economic and commercial entities in Costa Rica, among them chairman of Costa Rica PROCOMER and CEO of Exterior Exports Authority.

During the meeting, Al Owais welcomed H.E. The President and the accompanying delegation, hailing such significant visit - the first of its kind by a head of state in Latin America to the Chamber.

Al Owais said: “SCCI is proud to receive the Costa Rican President, a man of rich culture, historian, academic professor and the kind of character who cares about education, culture, history and heritage, who contributed significantly in his country economy’s prosperity and development.”

Al Owais added: “It is my pleasure to convey the gratitude of the leadership of the Emirate of Sharjah and SCCI family.  You have been known for recognizing His Highness Sheikh Dr. Sultan bin Mohamed Al Qasimi, Supreme Council Member and Ruler of Sharjah.  H.E. The President’s  visit to Sharjah stems from his impression of his highness’s academic and cultural reputation, in addition to his willingness to develop frameworks of cooperation between Sharjah and Costa Rica.”

SCCI Chairman considered Costa Rican President’s visit to the UAE as a positive outcome to H.H. Abdullah bin Zayed Al Nahyan UAE Minister of Foreign Affairs & International Cooperation’s visit to the Republic of Costa Rica in February 2016, where talks were held to address bilateral relations and means to boost and develop them serving mutual interests between the two nations.  SCCI is keen to positively push forward, develop and consolidate such relations.

Al Owais stressed such presidential visit reflects the good reputation of the Emirate of Sharjah and its economic status on the global level under the directives of HH Sheikh Sultan bin Mohammed bin Sultan Al Qasimi, Crown Prince and Deputy Ruler of Sharjah.

From his side, H.E. The President expressed his country’s sincere keenness to strengthen bilateral relations with the UAE, in general, and the Emirate of Sharjah, in specific, highlighting the successful economic vision and the prestigious cultural reputation of His Highness Sheikh Dr. Sultan bin Mohamed Al Qasimi, Supreme Council Member and Ruler of Sharjah.

The president talked about the features of the Costa Rican economy and the nature of his country’s foreign trade activities, hoping this visit will contribute in consolidating relations and exchange of investments between the two friendly nations.

From his side, H.E. Khaled bin Butti Al Hajri Director General of SCCI said such historical meeting will establish a new and fruitful phase in economic, commercial and investment relations between Sharjah & Costa Rica, and open the door for businessmen and organizations, in both countries, to have a closer look on the business environment and mutual available cooperation and investment opportunities.

The MoU between SCCI and the Costa Rican PROCOMER, which was signed between the Chamber’s chairman and H.E. Alexander Mora Delgado Chairman of PROCOMER, stipulates the coordination between the concerned parties from both sides in exchanging published material and information on a continuous basis, toward economic activities and trade development, including international trade exhibitions taking place in Sharjah, boosts economic cooperation, bilateral trade and consolidates support services for visiting delegations, paving the way for successful results among commercial projects.

The MoU calls for Emirati companies to participate annually in Costa Rica’s economic forums, and also welcoming commercial Costa Rican companies, which are involved in Business Technology Management (BTM), for buyers to participate in specialized and general exhibitions that are organized by SCCI.  This is in addition to coordinating with the concerned authorities and agencies for forums and conferences to exchange information, best practices in commercial activities for developing trade and investment between the Emirate of Sharjah and the UAE.

Aluminum is considered Costa Rica’s major import from the UAE.  Meanwhile, Costa Rica has been recognized for hosting the biggest plant for hydroelectric energy in Central America with a production capacity of 305.5 megawatt, while the country’s total production of renewable energy reaches up to 2.5 gigawatt, according to recent revelations from the Abu Dhabi-based International Renewable Energy Agency (IRENA) in ‘Masdar City’, where renewable energy sources meet 98% of demand on electricity in Costa Rica, according the Government-run Costa Rica Institute for Electricity