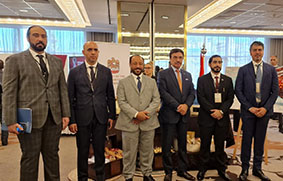 Sharjah Chamber of Commerce and Industry (SCCI) has concluded two days of participation in the 11th Arab-Hellenic Economic Forum, organised by the Arab-Hellenic Chamber in cooperation with the Union of Arab Chambers in Athens. 25th-26th October.

Led by HE Abdullah Al Owais, Chairman, Sharjah Chamber took part in the fourth "Meet the Arab Ambassadors" Roundtable Discussion, which was held on the sidelines of the forum.

In his capacity as Vice President of the UAE Chambers, Al Owais delivered a speech in the forum, shedding light on the Gulf-Greek relations, which are remarkably growing and prospering in all fields and serve the two parties' common interests, as well as economic, commercial, and investment cooperation, and spoke highly of the solid relations and the growing economic partnerships in many areas.

Despite the challenges brought on by the COVID-19 pandemic, the trade exchange between the UAE and Greece over the past two years increased significantly by 17%, and the value of non-oil trade in 2021 alone amounted to about AED2.1 billion, Al Owais said.

He added, "By the end of 2019, Greece's investments in the UAE amounted to over AED341 million, 50% of which were in the real estate sector, 23% in transportation and storage, 20% in building and construction, and .04% in information and telecom."

Compared to around AED217 million in 2011, Al Owais added that the entire amount of foreign direct investment from Greece to the UAE has significantly grown by 116% by the end of 2020, reaching AED 468 million.

He noted that Greek investments in the UAE had covered six sectors, including real estate, transportation and storage, building and construction, manufacturing, wholesale and retail trade, and other activities.

Al Owais continued, "The economic relations between the UAE and Greece have taken a considerable step forward in the past few years, with a series of agreements and memorandums of understanding inked by various authorities in the two countries. These MoUs and agreements covered different areas, from investment to renewable energy, health, industry, sophisticated technology, and other crucial sectors of significance to both nations.

"These figures highlight the fact that there are great prospects for a mutual comprehensive development," Al Owais said, adding that the forum will pave the way for achieving economic integration between both sides by taking advantage of both countries' economic plans and introducing their private sectors to these plans to boost partnership and mutual investments.

Al Owais expressed his appreciation to the Arab-Hellenic Chamber, the Union of Arab Chambers and all organisers for their tremendous efforts to stage such an event.