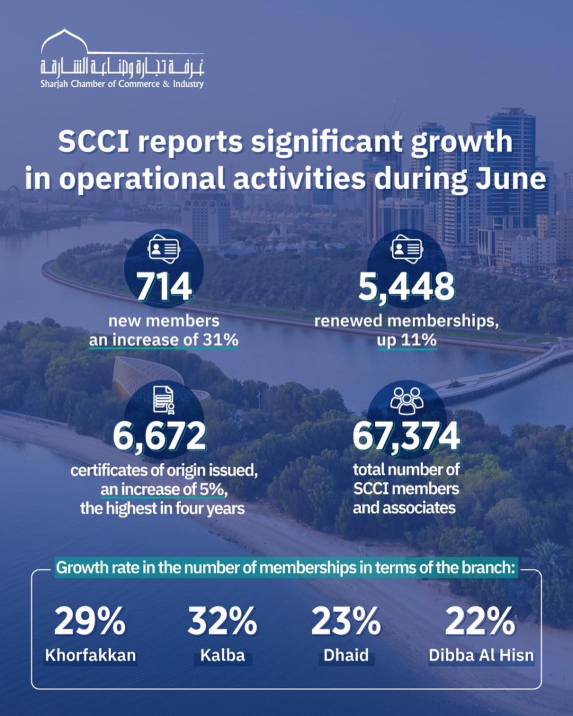 Sharjah Chamber of Commerce and Industry (SCCI) has reported a significant expansion in its operational activities over the past month compared to the same period last year.

The overall number of new and renewed members increased by 13 percent to 6,162 in June 2022, including 5,448 renewed memberships, an increase of 11 percent.

According to the SCCI report on June memberships and transactions, the Chamber's branches across the emirate saw considerable growth in memberships, with Kalba recording a 32 percent increase, followed by Khorfakkan with 29 percent, Al Dhaid with 23 percent, and Dibba Al Hisn’s representative office with 22 percent. This brings the total number of SCCI members and associates to 67,374.

"We are committed to fostering Sharjah's position as a global economic hub and a top investment destination by supporting and representing the business community both domestically and internationally," Al Awadi said.

For his part, Abdulaziz Shattaf, Assistant Director-General for Business and Communication Sector at SCCI, said that the Chamber attaches utmost attention to diversifying its programs to bolster the business sectors and is therefore introducing high-quality initiatives like "Sharjah Promotions," which offers a variety of marketing and promotional festivals that energize the trade, retail, and tourism sectors and promotes the emirate's facilities.

"Additionally, the Chamber frequently visits its members to learn about their needs and help them overcome various challenges thanks to an integrated system of high-quality services that has greatly aided in boosting memberships numbers and attracting new businesses to the emirate," Shattaf added.