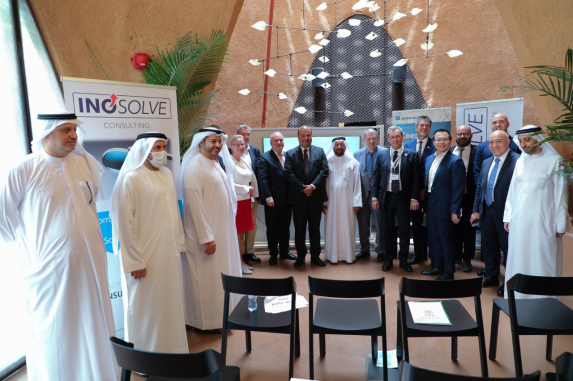 Sharjah Chamber took part in Arab Chambers Day, held recently at the Austrian pavilion of the Dubai Exhibition Centre (DEC) venue, and organized by the Austro-Arab Chamber of Commerce (AACC) and in partnership with the Union of Arab Chambers, the League of Arab States, Arab and foreign chambers, and the Austrian Federal Economic Chamber.

HE Abdullah Sultan Al Owais, Chairman, headed Sharjah Chamber’s delegation and expressed his appreciation for this initiative as a means to achieve qualitative integration between Arab Chambers and learn best practices and mechanisms suitable for keeping pace with regional economic trends, in addition to setting frameworks for cooperation between Arab economies, opening channels for partnerships between investors, and following up on the private sector.

Al Owais stressed Sharjah Chamber’s keenness to support all Arab chambers, in line with the UAE’s strategy of adopting issues pertinent to all Arab countries, consolidate cooperation in the sectors of commerce and industry and increase investment opportunities, increase two-way (or intraindustry) trade, as well as achieve Arab economic integration within the framework of a comprehensive, effective and advanced formula, by representing all economic sectors’ aspirations and supporting their role in the development and integration of their national economies.

For his part, Dr. Richard Schinsz, President of the Austrian Arab Chamber of Commerce, expressed his happiness with this initiative for creating a platform to promote effective dialogue between Arab Chambers, reviewing various aspects of development for business communities in Austria and the Arab countries, focussing on strategic partnerships between Emirati and Austrian companies and economic ventures, and strengthening bilateral relations that extend over 50 years to broader horizons of investment and common interest.

The Forum also witnessed a review of areas of cooperation between the UAE and Austria in sectors that have yet to be involved, such as the health and food sector and service consultancy, and reaching agreement on the principles of and open economy for a prosperous future.