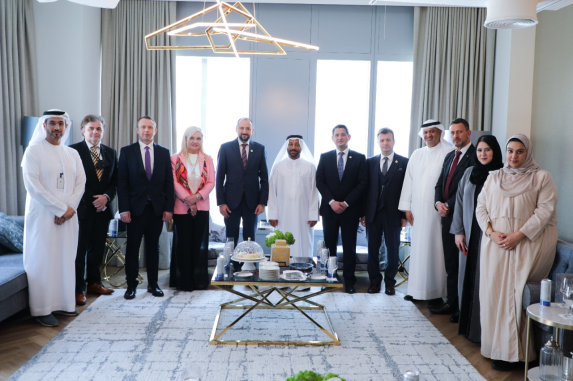 Sharjah Chamber of Commerce and Industry (SCCI) received a high-level Macedonian delegation at its representative office at Expo 2020 Dubai, to discuss ways to enhance trade and economic relations between the business communities in Sharjah and Macedonia, explore available investment opportunities, especially in the sectors of agriculture, tourism, health and livestock, and exchange trade delegations during the coming stage.

HE Abdullah Sultan Al Owais, Chairman of the SCCI received the visiting delegation headed by HE Fatmir Bytyqi Deputy Prime Minister in Charge of Economic Affairs, accompanied by representatives of the Chambers of Commerce and Industry in North Macedonia.

During the meeting, Al Owais reviewed Sharjah's stimulating business environment, its modern infrastructure, various investment opportunities that ensure the success of bilateral relations between the two sides, especially Macedonian companies wishing to enter the region’s market for growth and success.

Al Owais made it clear that the SCCI provides all forms of support to investors to enhance their activities, noting that both countries can work together in different sectors to improve trade relations, such as the food security sector, given the abundance of water and agricultural resources in Macedonia, while on the other side, Sharjah and UAE, in general, has a distinguished agricultural and animal production sector.

For his part, Fatmir Bytyqi said that the UAE has one the fastest growing economies, expressing his country's desire to enhance joint cooperation between the two sides, in addition to establishing investment partnerships in various fields and sectors in Sharjah in particular in sectors such as tourism, finance, trade, and agriculture.

He pointed out that Macedonia is known for agricultural trade, food industries, information and communications technology, textiles and clothing, noting the two sides' eagerness to strengthen economic and trade cooperation frameworks to serve the common goals of the two countries.