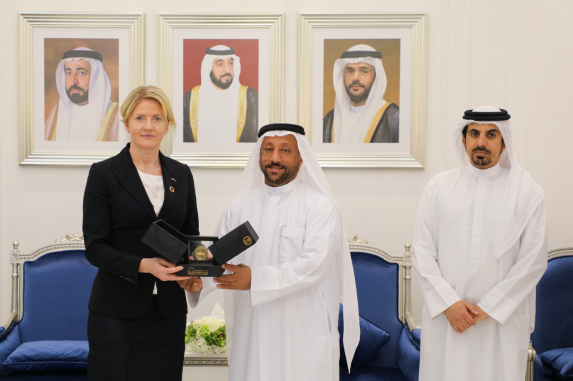 The meeting discussed ways to enhance the economic partnership and the prospects for development, to serve the business environment between the two friendly countries, in addition to exchanging views on a number of bilateral economic developments of common interest.

Abdullah Sultan Al Owais stated that the UAE, in general, and the Emirate of Sharjah, in particular, have strong relations with the Republic of Estonia, noting that the SCCI, during the past months, organized official meetings with many Estonian officials and trade delegations.

This culminated in the signing of an MoU with the Estonian Association of Information Technology and Telecommunications, where the two sides stressed the importance of enhancing cooperation and exchanging experiences to meet the aspirations of the business sector for both sides.

Al Owais added that the Estonian side was briefed at that time on the outstanding facilities offered by the Emirate of Sharjah to businessmen wishing to invest in it.

He underlined that the Emirate of Sharjah is a distinguished investment destination due to its economic diversity, important geographical location, regulatory legislation and laws, government facilities, free zones, modern ports, and promising investment opportunities.

Eva Maria Liimets praised the warm reception, expressing her great admiration for the innovative services provided by SCCI, as well as the exceptional privileges granted to foreign investors, stressing her country's keenness to deepen bilateral relations with the UAE, in general, and the Emirate of Sharjah, in particular,

She noted that the UAE is an important partner to Estonia and the visit will provide a perfect platform for strengthening relations with the public and private sectors in Sharjah.

Both sides expressed their desire to enhance trade and economic relations, with a focus on advanced sectors such as technology, artificial intelligence, information technology, scientific research and health.

They also agreed to organize visits and forums in the near future between the two business communities to conclude commercial deals in order to continue efforts to strengthen cooperation relations and explore new opportunities during the next stage.