SCCI celebrates former heads and board members in its Golden Jubilee 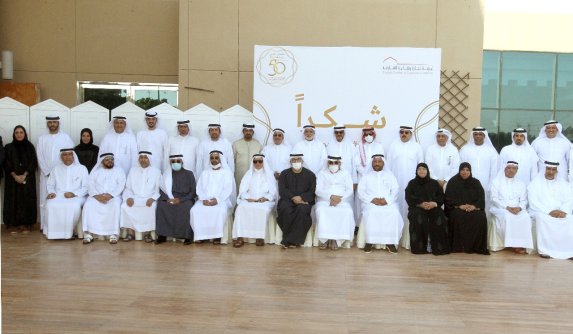 The Sharjah Chamber of Commerce and Industry (SCCI) said that honoring prominent figures that laid the foundations and solid rules for the Sharjah Chamber and translated the visions and directives drawn by His Highness Sheikh Dr. Sultan bin Muhammad Al Qasimi, Member of the Supreme Council and Ruler of Sharjah, is in recognition of their efforts and hard work to foster the role of the Chamber in cementing Sharjah's position on the map of the local and global economy.

This came during a meeting recently organized by the SCCI at the Sharjah Golf and Shooting Club to honor former heads and board members on the occasion of its celebrations of the golden jubilee and the 50th anniversary of its establishment.

The meeting was attended by HE Abdul Rahman bin Muhammad Al Owais, Minister of Health and Prevention, HE Abdullah Sultan Al Owais, Chairman of the SCCI, and a number of members of the Chamber's Board of Directors, former members, directors of departments and employees.

"Honoring the SCCI former heads and board members of the is the least we can do to show our appreciation for those who laid the basic foundation for the establishment of this economic edifice, which, thanks to their tremendous efforts for 50 years, played an active role in bringing about a paradigm shift in serving the private sector in Sharjah, establishing an effective commercial and industrial infrastructure, and creating an attractive and safe investment environment that encouraged many of the people of Sharjah, other Emirates, and brotherly countries to invest in the emirate, thanks to the patronage and ongoing support of His Highness Sheikh Dr. Sultan bin Muhammad Al Qasimi, Member The Supreme Council, Ruler of Sharjah," said Abdullah Sultan Al Owais.

"This tribute reflects to what extent the values of loyalty are deeply rooted in the Emirati society. It also exemplifies the meanings of cohesion that link the successive leaders of the Chamber, which is a major factor in strengthening the Chamber’s role to fulfill its responsibilities," said HE Saif Mohammed Al Midfa.

He expressed his pride in belonging to this entity, which has succeeded over 50 years of excellence, achievement and giving in developing the national economy and diversifying the fields of investments in it.

HE Mohammed Ahmed Amin Al-Awadi stated that the ceremony was held in a family, brotherly and friendly atmosphere, lauding the tremendous efforts made by the former heads and board members to promote the interests of the business sector