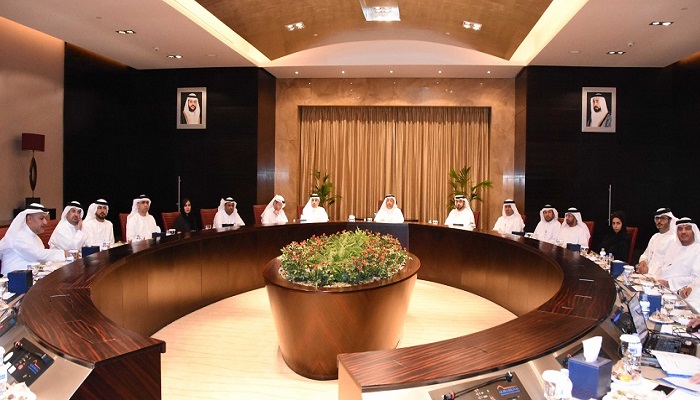 Sharjah Chamber of Commerce and Industry’s Board of Directors stated that their commitment to promote Sharjah’s economic position falls within the prudent directives of His Highness Sheikh Dr. Sultan Bin Mohammed Al Qasimi, Member of the Supreme Council and Ruler of Sharjah, and dynamic pursuit of His Highness Sheikh Sultan bin Mohammed Bin Sultan Al-Qasimi, Crown Prince and Deputy Ruler of Sharjah.

During the periodical meeting, SCCI’s Board of Directors expressed their commitment to pursue constructive cooperation with all government entities concerned with economic affairs on both local and federal levels.

SCCI’s Board highlighted the importance of orchestrated efforts to develop initiatives that attract the private sector, increase its efficiency, empower business entrepreneurs to engage in all business activities as well as providing attractive environment for them, to ensure their effective participation in the nation-wide process of sustainable development.

HE Abdullah Al Owais, Chairman of SCCI said: “SCCI is committed to maintain its role as a top representative and motivator for the private sector, in addition to being a pioneer in developing pilot initiatives to create economically viable opportunities. At the same time, SCCI will work to provide all means of assistance to ensure its development, while keeping pace with economic and social developments in the country, in line with the “UAE Vision 2021”, which aims to position the UAE among the best countries in the world within the next five years.”

Al Owais also asserted SCCI’s commitment to open new prospects of partnership to solidify its reputation among its counterparts in regional and global markets, and establish an outstanding presence and representation to satisfy all economic sectors, while facilitating trade and world-class products exchange within various foreign markets.

HE Khaled bin Butti hailed SCCI’s accomplishments during 2016, which covered different aspects of the operational plan and achieved the targeted aims. He said the progress was clearly reflected on the performance indicators presented during the meeting, in line with SCCI’s goals.

“The board had praised the innovative initiatives launched by SCCI during 2016, which, in turn, raised its position and acquired the satisfaction of its various partners. In addition, SCCI seeks to promote its role in the field of social responsibility by giving back to the community.” Khaled bin Butti added.

Khaled bin Butti Al Hajri pointed out that there was an increase of 1 per cent in SCCI’s memberships during 2016, totaling 65213 members, of whom 7796 are new members in the HQ and its branches in: Khorfakkan, Kalba, Dhaid, and Dibba Al Hisn. In the same context, certificates of origin have been also on the rise, which reflects a remarkable growth in the emirate’s exports. This growth has driven SCCI to operate an e-service network to complete transactions as fast as possible.

Moreover, The Board adopted the SCCI’s budget of the fiscal year 2017, along with important initiatives and indicators of the operational plan suggested for next year.