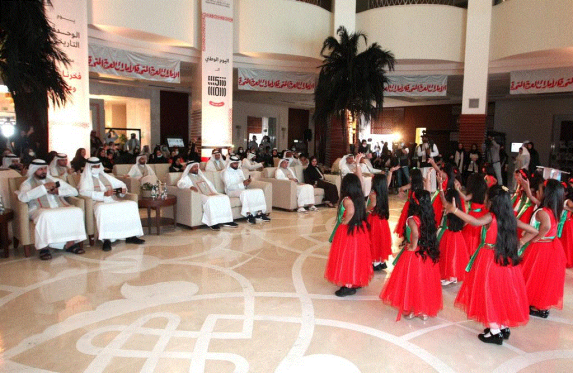 In commemoration of the UAE's 50th National Day, the Sharjah Chamber of Commerce & Industry (SCCI) organized several activities and events at its head office. The facade of the building was lit up with the UAE Golden Jubilee logo and the state's flag, while the SCCI officials delivered various speeches to express their pride in the homeland and its leadership.

"We celebrate the UAE golden jubilee while amidst great achievements in so many fields," said HE Abdullah Sultan Al Owais, Chairman of the SCCI. "The National Day is a national occasion to celebrate the pride of a nation which its glories were built by the wisdom of the late Sheikh Zayed bin Sultan Al Nahyan, and the march of development and prosperity developed at the hands of our wise leadership, reaching to a point where the UAE competes with developed countries in all fields.

"Today, we celebrate the 50th anniversary of a country that has proven its ability to achieve accomplishments, excellence, and leadership, becoming at the forefront of world countries. We also celebrate the bright future for us and for generations to come, as well as the resolve and determination of our wise leadership, and the willpower and loyalty of our people," said HE Mohammed Ahmed Amin Al Awadi, Director-General, SCICI.

Al Awadi made it clear that the UAE's leading position wouldn't have been possible had it not been for the wisdom of the founding fathers and the insightful visions of the wise leadership. He stressed that these visions were the key pillars for supporting the nation-building effort and shaping its future, and have enhanced the country's status and leadership role at all levels