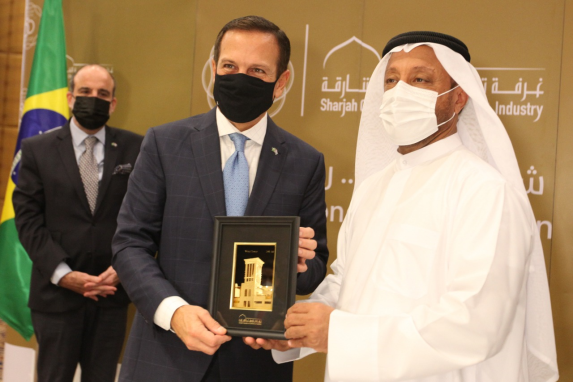 The Sharjah Chamber of Commerce and Industry (SCCI) organized on Wednesday the Sharjah-Sao Paulo Business Forum, which was held on the occasion of the visit of a high-level delegation from the Republic of Brazil headed by HE João Agripino da Costa Doria Júnior, Governor of Brazil's southeast state of Sao Paulo.

A number of ministers from the state of Sao Paulo and officials from government institutions and bodies in the Emirate of Sharjah, as well as a large crowd of businessmen from major Brazilian and UAE commercial, food, and industrial companies, were also present in the forum.

On the sidelines of the event, a memorandum of understanding (MoU) was signed between the Sharjah Chamber and Investe SP, Sao Paulo.

The MoU aims to strengthen trade relations, facilitate economic cooperation between the business communities in both countries, exchange trade delegations, enhance discussions in the fields of export and economy and support follow-up visits for this purpose, and promote available investment opportunities, exchange experiences, knowledge and training for members.

In his speech, Abdulla Sultan Al Owais said: "the total volume of trade exchange between the UAE and Brazil reached $2.7 billion by the end of the last year. Agro-food products accounted for 60% of the total Brazilian exports to the UAE, while the value of investment flows between the two countries amounted to about 700 million dollars (2.56 billion dirhams) during the past five years. These figures have put the UAE in the first place in the Arab world in terms of trade and investment dealings with Brazil."

Al Owais added: "The value of the UAE’s imports from Brazil in the first quarter of this year amounted to about $352.2 million (1.29 billion dirhams), ranking third place among the largest importers of Brazilian goods. The UAE's main imports from Brazil included iron ore, as well as food products such as sugar, poultry, beef, grains, soybeans and corn. The UAE is also the second-largest buyer of Brazilian products in the Middle East, while oil, urea, sulfur and aircraft spare parts are among the UAE's main exports to Brazil. The UAE is also among the largest international investors in Brazil, with investments estimated at about $5 billion.

"The state of São Paulo accounts for 30% of the total Brazilian economy, and has the largest manufacturers of sugar, juices, coffee, and fruits, and has the best airports and a developed road network. In addition, the state has 4 million entrepreneurs, and during the past year, it attracted more than one million entrepreneurial projects," said João Agripino da Costa Doria Júnior, Governor of Brazil's southeast state of Sao Paulo.

He noted that Sao Paulo's economy this year has improved by 8%, which is the best in 50 years, adding that the state has provided one million and 200 thousand jobs this year and has more than 20 new projects.

Brazil is one of the top 10 economies in the world, while the city of São Paulo was included in the “Global Cities of the Future 2021/2022”, as a result of its investment of about two billion US dollars in scientific research only.

Mohammed Juma'a Al Musharrakh, Chief Executive Officer (CEO) of the Sharjah FDI Office (Invest in Sharjah), made a presentation on the opportunities for foreign direct investment in the sectors that drive sustainable development Sharjah, highlighting the outstanding investment environment in the emirate and the key sectors that are able to attract foreign investments and startup from around the world to Sharjah.

He added that more than 10,000 companies are operating in the free zones in Sharjah and about 60,000 small and medium companies.

Al Musharrakh called Brazilian businessmen and investors to capitalize on the recent economic reforms witnessed by Sharjah, including raising foreign ownership in a number of economic sectors to 100%, besides the distinguished residency programs and visas for investors and many other exclusive privileges.