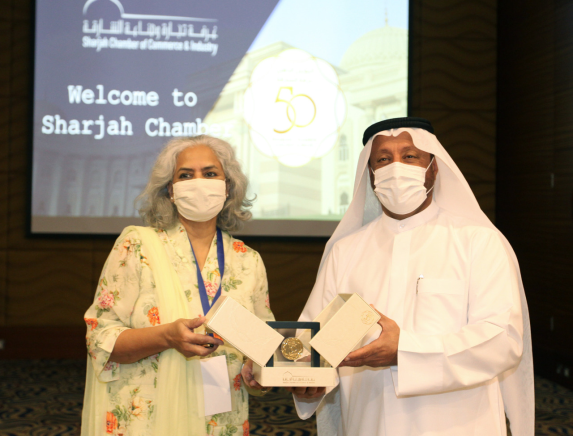 The Sharjah Chamber of Commerce and Industry (SCCI) called on Indian companies to take advantage of the promising investment opportunities in Sharjah, in view of the facilities and privileges the emirate provides to the companies willing to invest in it. This came during the UAE-India Business Forum organized by the Sharjah Chamber on the sidelines of an Indian delegation visit, represented by the Associated Chambers of Commerce and Industry of India, to the UAE. During the forum, a memorandum of understanding (MoU) was signed between the SCCI and the Associated Chambers of Commerce and Industry of India. The agreement aims to enhance and facilitate economic cooperation between business communities, exchange trade delegations, engage in economic discussions, and promote available investment opportunities to encourage bilateral investments. HE Abdullah Sultan Al Owais, Chairman of the Sharjah Chamber, said: "It goes without saying that the two friendly countries have long-standing diplomatic, economic, and cultural ties, where India is the second-largest trading partner of the UAE, accounting for 9% of the UAE's trade volume with the world, and 13% of the UAE's non-oil exports. During the first half of this year, the value of bilateral trade reached $21 billion, an increase of 70% compared to the same period last year. Al Owais continued to say that the UAE is considered the third most important source of India's imports, where the UAE accounts for 40% of India's total trade with the Arab world, while about 13% of India's exports are re-exported through the UAE to the GCC, Iran, Iraq and some Central Asian countries. He underlined that the UAE strives to double the volume of non-oil trade with India to about $100 billion over five years, which is part of its efforts to deepen relations with the fastest-growing economics in the world. Ms. Meenakshi Sharma, Assistant Secretary-General, Associated Chambers of Commerce and Industry of India, underscored that Indian companies are keen to strengthen trade relations with the UAE, especially with Sharjah, owing to its promising opportunities and privileges that contribute to pushing forward bilateral relations and enhancing joint cooperation in many vital sectors.