SCCI explores investment opportunities in IT with European states 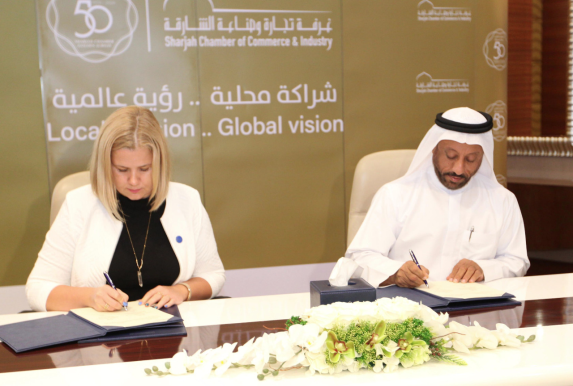 The Sharjah Chamber of Commerce and Industry (SCCI) organized a business forum that brought together delegations from various European states, including Estonia, Latvia and Sweden.

The forum discussed investment opportunities in the IT sector between Sharjah and the major technology centers in the European continent.

A memorandum of understanding (MoU) was signed on the sidelines of the forum between the SCCI and the Estonian ITL, aimed at facilitating economic cooperation among business communities, by exchanging digital transformation opportunities as well as encouraging scientific research in the field of technology.

The MoU is also meant to exchange experiences, technical knowledge and best practices in digital governance and training opportunities for members of both sides, as well as promote available investment opportunities to encourage bilateral investments.

While welcoming the visiting delegations, HE Abdullah Sultan Al Owais, Chairman of the SCCI expressed the hope that the forum would constitute a new and promising beginning in the process of building a distinctive and sustainable economic partnership between the two sides that would contribute to expanding the horizons of trade exchange.

He pointed that the forum comes in line with the visions of the wise leadership and its keenness to enhance the local investment environment by introducing European businessmen to the promising and lucrative investment opportunities in Sharjah, particularly in light of the exclusive benefits offered by various government bodies to foreign investors.

He went on to say that the total trade exchange between the UAE and Sweden amounted to 2.2 billion Dirhams during the past year, of them imports of two billion dirhams, and exports amounting to 240 million dirhams.

Doris Põld expressed her admiration for the development and urban renaissance of Sharjah and spoke about Sharjah's position as a key destination in the agenda of businessmen, businesswomen, and European tourist delegations visiting the UAE.

She lauded the efforts of the Sharjah Chamber in organizing the forum with the delegation of the Estonian Association of Information Technology and Telecommunications and representatives of companies From Latvia and Sweden.

Põld underlined that the meetings were very fruitful and constructive, which reflects the role of Sharjah in developing and enhancing relations between the European Union countries and the UAE.

"Through this forum, the SCCI seeks to develop relations, increase the volume of mutual investments and enhance the balance of trade exchange, especially in the field of tourism, heavy equipment, communications, chemicals and real estate," said Mohamed Ahmed Amin Al Awadi, Director-General, SCCI.

He noted that the forum pays particular attention to the cooperation in the manufacturing sector, which is a vital sector of common interest for all parties, especially with the Emirate of Sharjah becoming a regional major hub in the industrial sector.

Al Awadi added that the business forum would help strengthen cooperation in the digital field, whereas Estonia is one of the developed countries in the field of information technology in Europe.