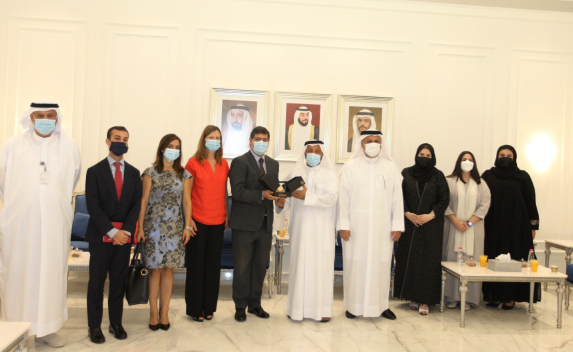 The delegation was received by HE Abdullah Sultan Al Owais, Chairman of the SCCI, in the presence of HE Mohammed Ahmed Amin Al Awadi, Director-General of the Sharjah Chamber.

The visiting delegation included Marta Costa, the Portuguese Assistant Minister of State for Globalization, Francesca Guedes de Oliveira, Deputy Commissioner-General of the Portuguese delegation participating in Expo 2020 Dubai, and Daniel Pontas, Economic Adviser at the Portuguese Embassy in the country.

The meeting explored the areas of cooperation between the two countries and the importance of organising joint programmes that serve the interests of their business communities, as well as a trade mission to Portugal in 2022, to enhance economic, trade and investment bilateral relations.

Al Owais welcomed the visiting delegation and pointed to the depth of relations between Sharjah and the Portuguese business community, thanks to the mutual visits of official and commercial delegations between Sharjah and Portugal, which culminated with the launch of the first Portuguese Business Council in Sharjah in January 2021, in addition to organizing the Sharjah-Portugal Business Forum in cooperation with the Aicep Portugal Global last June.

Al Owais pointed out that the Portuguese Business Council falls within the SCCI's initiative to establish business councils for brotherly and friendly countries including businessmen from those countries.

The SCCI Chairman showcased before the Portuguese delegation Sharjah's economic growth and future projects across all sectors and invited Portuguese businessmen and companies to invest in Sharjah and participate in relevant international events, as they provide invaluable opportunities to forge partnerships with UAE companies and institutions.

For his part, Eurico Brilhante Dias expressed his country's eagerness to enhance trade relations with Sharjah, noting its keenness to tap into SCCI's leading distinctive experiences in supporting its local business community and attracting foreign investment.

Dias invited the SCCI to visit Portugal's pavilion at Expo 2020 Dubai, which will provide a leading platform to organise bilateral meetings between the business communities of both countries.

He extended an invitation to Emirati bodies and companies working in the field of port operation to visit the port of Lisbon, describing it as one of the most essential European ports, through which the most important maritime communications across the Atlantic Ocean take place.

Dias stressed his eagerness to stimulate Portuguese companies to visit Sharjah and learn about the economic potentials the emirate enjoys.