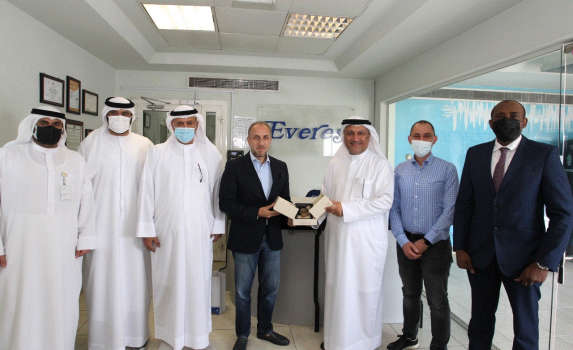 The visit is one of a series of field visits the SCCI conducts to the business facilities of its members. The delegation included HE Mohammed Ahmed Amin Al-Awadi, Director-General, SCCI, Jamal Bouzanjal, Director of the Media Department, Marwan Al-Muhairi, Head of the International Exhibitions Department at the Sharjah Exports Development Center, and a number of Chamber employees.

The SCCI delegation was received by Ziad Hassan, General Manager of Everest Industrial, where they inspected the company's workflow, production, and export programs, in addition to its marketing and promotion plans to penetrate regional markets.

The delegation was also briefed on the factory management mechanism and the approved production lines that are supported by high-quality technical mechanisms.

During the visit, the two sides a number of issues related to the reality of the industrial sector the most important needs of Sharjah's industrial sector from the point of view of a member of the Board of Directors of the company, which is one of the oldest factories specializing in refrigeration in Sharjah.

Mohammed Ahmed Amin Al-Awadi expressed the SCCI's appreciation for the efforts of the industrial establishments in the Emirate of Sharjah and their role and positive impact on the industries that characterize the emirate locally and regionally.

Al Awadi pointed out that the visit comes as part of the SCCI's endeavors to enhance communication with the local business community and find out more about the reality of the economic sectors in general and the industrial sector in particular.

He noted that Such tours provide an opportunity to exchange views and work together to overcome any challenges that may hinder the growth and prosperity of industrial enterprises' businesses, as well as to examine the level of quality of services provided to them, whether by the Chamber or the concerned economic and governmental authorities.

For his part, Ziad Hassan expressed his appreciation for the visit of the SCCI delegation to the company, lauding the Chamber's support to private sector facilities and its tireless efforts to promote national exports in various markets of the world.

Hassan pointed to the importance of such visits in delivering the proposals and requirements of companies and factories to the concerned authorities and decision-makers, which contributes to developing the industrial sector and serving the interests of its workers effectively.

He underlined his company's commitment to continuing work to improve the quality of products to the highest levels in accordance with the highest Emirati and international specifications.