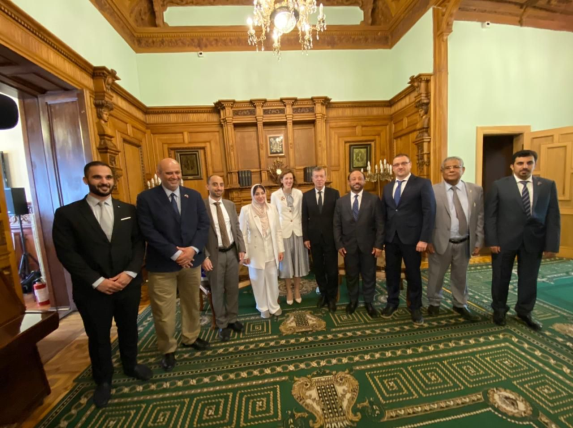 The Emirate of Sharjah's trade mission to Russia concluded its work by holding several meetings with officials from representatives of government agencies and private companies in Saint Petersburg.

The mission, which is part of Sharjah Week in Russia from 6-12 September, was led by the Sharjah Chamber of Commerce & Industry (SCCI) represented by the Sharjah Exports Development Center (SCCI).

The last stop was in Saint Petersburg, where HE Abdullah Sultan Al Owais, Chairman, SCCI, met with Arabi Abubakarov, Deputy Chairman of the International Relations Committee, Konstantin Sokhenko, Chairman of the Culture Committee, and representatives of the Committee on Industrial Policies, Innovations, and Trade in St. Petersburg.

During the meeting, the two sides discussed several topics of mutual interest and emphasized the need to double efforts to restructure laws and regulations that spur investment, especially after the Covid-19 pandemic.

They also highlighted the importance of enhancing cultural cooperation between Sharjah and Saint Petersburg by strengthening the communication between relevant government institutions and bodies.

In the meantime, the Sharjah Chamber invited Saint Petersburg to participate as a guest of honor in the 50th Watch & Jewelry Middle East and Show (WJMES) which is set to take place in April 2022.

The participants also agreed to develop a mechanism for exchanging information, visits and trade delegations, especially small and medium companies in order to support this vital sector.

Abdullah Sultan Al Owais shed light on the tourist, cultural and economic factors, and the investment climate of the Emirate of Sharjah, in addition to the so many competitive advantages which makes Sharjah an ideal environment for Russian businessmen, not to mention its strategic location which makes it an important gateway to various countries in the region.

The attendees emphasized the need to join forces in order to support the development of areas of economic cooperation between the UAE in general, Sharjah in particular, and Russia.

In the same meeting, the SCCI received an official invitation to participate in the Saint Petersburg Chamber's celebrations marking the centenary of its establishment, which is set to take place next November.

Abdullah Sultan Al Owais: "We have fruitful partnerships and strong cooperation with the Saint Petersburg Chamber. We look forward to strengthening joint efforts to benefit from the rewarding investment opportunities in the industrial and commercial sectors and other sectors, relying on the organization of such missions.

He also stressed the importance of making the most of the bilateral relations between the Emirate of Sharjah and the historic city of Saint Petersburg by organizing many joint cultural events.

For his part, Vladimir Katanaev expressed his pleasure to meet the SCCI delegation once again, lauding the existing partnership relations between the Sharjah and Saint Petersburg Chambers over the past years.

He added that Russia's participation in Expo 2020 Dubai will be an opportunity to hold business meetings, especially those that will be organized by the UAE-Russia Business Council.

He expressed his country's welcome to Emirati investors to visit the city to learn about its investment components in vital sectors such as international navigation, agriculture, industry, and advanced technology.

Bilateral meetings were also held between the businessmen participating in the delegation of the Sharjah Chamber mission and their counterparts in Saint Petersburg, who made presentations on the investment opportunities and advantages they enjoy, with the aim to establish partnerships that serve the private sector, increase the volume of trade exchange, and develop projects in various sectors.