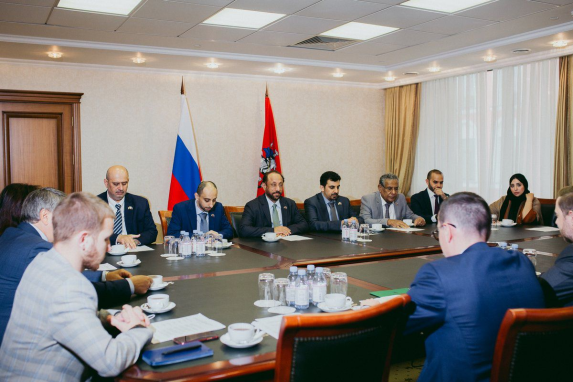 The Emirate of Sharjah's trade mission to Russia, headed by the Sharjah Chamber of Commerce & Industry (SCCI) and represented by the Sharjah Exports Development Center (SEDC), saw the organization of several activities as part of the Sharjah Week in Russia.

One of these activities is the meeting held at the Moscow Chamber of Commerce and Industry between HE Abdullah Sultan Al Owais, SCCI, Chairman, and Vice President of the Moscow Chamber for International Relations, Sorin Oganisovich Vardanyan, to discuss areas of cooperation and coordination and investment opportunities available in different economic sectors.

During the meeting, the two sides highlighted the services provided by each chamber to its members, stressing the importance of exchanging visits between commercial delegations due to their role in taking relationships to the next level.

They also discussed the possibility of cooperation between the two chambers in order to organize a trade mission from Moscow to Sharjah in the coming period.

As part of the mission works in Moscow, the SEDC organized at the Moscow Chamber an expanded business meeting between the representatives of the Emirati companies with their Russian counterparts in various economic sectors.

During the meeting, Al Owais said that the SCCI's strategy of foreign relations is built on organizing and leading trade missions, underlining the importance of the current mission in enhancing direct communication and learning closely about fields of cooperation in various economic sectors.

Al Owais added: "The mission also represents a new gateway for several investment opportunities that serve both business communities, increase exports the volume of trade exchange between the cities.

He said that the SCCI has distinguished partnerships with many Russian Chambers of Commerce and Russian government bodies, expressing his hope that these relations will enhance the joint efforts to take advantage of the rewarding investment opportunities in the industrial, commercial, and other sectors.

For his part, Sergey Nosov lauded the efforts of SCCI in organizing the mission, adding that the Russian government, represented by the Ministry of Industry and Trade, is ready to provide all means of support to encourage cooperation between the business communities in both countries.

Nosov indicated that his country's participation in Expo 2020 Dubai represents an important opportunity to bring Russian businessmen closer to the reality of commercial and industrial activity in the Emirate of Sharjah and hold direct business meetings with their counterparts.

He said it's important for Russian companies to take advantage of Sharjah's strategic location, its services and logistical components, as well as air and seaports, in entering other regional markets.

The visit included presentations on the Emirate of Sharjah and the city of Moscow about the economic, social, cultural, and tourism aspects.

The two sides discussed the importance of cooperation to find ways to support the products of SMEs owners. They also discussed the possibility of organizing Moscow Day in Sharjah as an economic and cultural event sponsored by the Sharjah Chamber during Russia's participation in Expo 2020 Dubai.

For his part, Dmitry Prokorenkov expressed his country's willingness to organize exhibitions and trade missions to the Emirate of Sharjah and the cooperation with the SCCI to establish joint events that enhance trade exchanges and strengthen the presence of Russian products in the UAE markets.

He underlined that the Russian Export Center is keen to consolidate relations with the Sharjah Export Development Center and collaborate in establishing tangible projects that cater to the aspirations of both sides.

The last stop of the SCCI trade mission will be in Saint Petersburg. The mission schedule there includes meetings and a forum during which the Sharjah Chamber and the participating local private sector companies will make presentations on the advantages offered by the Emirate of Sharjah for foreign investors and businessmen, most importantly the encouraging and promising investment climate