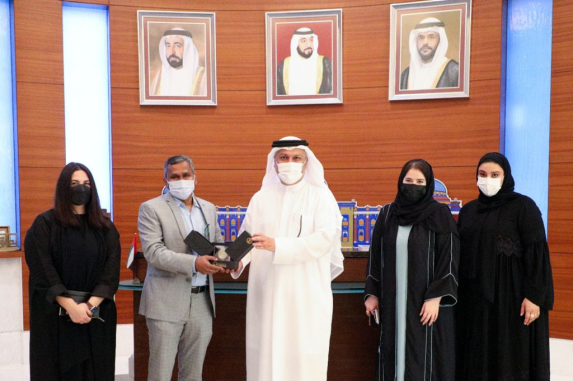 The Sharjah Chamber of Commerce & Industry (SCCI), represented by its Director-General, HE Mohamed Ahmed Amin Al Awadi, recently received at the Chamber's headquarters K. Kalimuthu, Consul of Economy and Commerce at the Consulate General of India in Dubai.

The meeting discussed the joint economic ties and ways to enhance the role of the industrial and commercial sectors in view of the fruitful cooperation between the two friendly countries.

Fatima Al Mokarrab, Director of the SCCI International Relations Department, also attending the meeting, in which the two sides exchanged views on ways to make the most of the experiences available in both sides, which contributes to forging joint investment ventures and enhancing perspectives of communication between the two business communities.

During the meeting, the two sides stressed the importance of developing initiatives that intensify the meetings of commercial delegates. This would speed up the performance of various business sectors and boost bilateral cooperation in the cultural, tourist, and educational fields.

Mohamed Ahmed Amin Al Awadi said: "The UAE-India relations are historic ones based on mutual respect and common interests in several social and cultural areas, especially the economic one.

He underscored the Chamber's keenness to foster cooperation with the Consulate General of India in Dubai with a view to developing the economic and commercial ties between Sharjah and India.

The SCCI Director-General highlighted the economic landscape in the Emirate of Sharjah and its investment privileges, as well as the services provided by the Sharjah Chamber to companies willing to invest in the emirate.

Commending the central role of the SCCI in supporting the commercial development between the UAE and India, K. Kalimuthu stated that the meeting comes within the context of developing cooperation between India and Sharjah, in view of the increased investment inflows between the two countries, as well as the economic and commercial businesses that reached high levels of coordination and partnership.

He underlined that the Consulate General of India in Dubai is keen to boost cooperation with the Sharjah Chamber in order to enhance trade exchange and move forward towards broader horizons of economic partnerships.