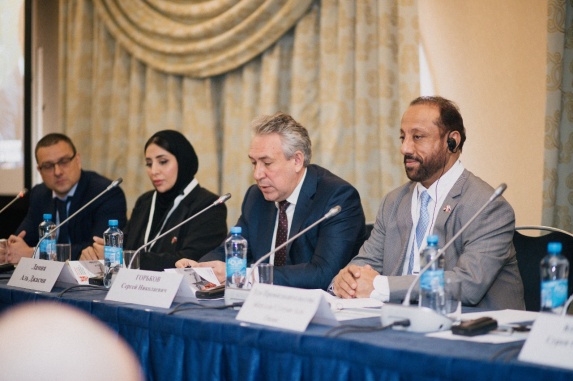 The activities of the "Sharjah Week in Russia'' are currently underway, which is held on the occasion of the visit of the Sharjah's trade mission to Russia.

The mission recently held the Sharjah-Russia Business Forum under the title "Cooperation Opportunities between Industrial Companies", with the aim of strengthening cooperation frameworks between Russian exporting companies with their counterparts from Sharjah.

The meeting, which was held at the headquarters of the Moscow Chamber of Commerce and Industry, was attended by HE Excellency Abdullah Sultan Al Owais, Chairman, SCCI, HE Walid Abdul Rahman Bukhatir, Second Deputy Chairman of the Sharjah Chamber, and Sergey Gorkov, Chairman of Russia-UAE Business Council.

Present also were Abdul Aziz Muhammad Shattaf, Assistant Director-General of the Chamber for the Member Services Sector, Director of the Sharjah Exports Development Center, Lamia Abdul Rahman Al Jasmi, Senior Executive of National Industries Development, and from the Russian side, Sorin Oganisovich Vardanyan, Vice President of the Moscow Chamber of Commerce and Industry for International Relations, in addition to a number of officials in the Chambers of Commerce and official economic bodies, and representatives of major Russian companies and Emirati businessmen participating in the mission.

At the opening of the forum, Sergey Gorkov stressed the importance of this mission led by the Sharjah Chamber in strengthening economic cooperation relations between Russia and the UAE.

He pointed to the ongoing coordination between the two friendly countries especially in the sectors of agriculture, advanced technology, and tourism.

This would enhance the volume of non-oil trade exchange, which amounted to approximately two and a half billion dollars at the end of 2020, he noted.

Gorkov commended the efforts exerted by the Sharjah Chamber in organizing this forum which is an important opportunity for representatives of the business community from both countries to hold direct meetings. This contributes to identifying new areas and opportunities for future cooperation, building investment partnerships, and concluding commercial deals that enhance economic relations in various vital sectors.

For his part, Abdullah Sultan Al Owais: "The forum reflects a sincere desire from both sides to continue the joint work and direct communication between business communities in the two friendly countries and discuss ways to establish new partnerships.

Al Owais shed light on the role of the Sharjah Chamber in supporting these relations, underlining that the Chamber spares no effort to spur the private sector to participate in the economic events taking place in the two countries.

The Chamber also provides all possible facilities for businessmen to introduce the local business community, which contributes to increasing the volume of trade and investment exchange between the two friendly countries, he added.

Al Owais invited Russian businessmen and investors to visit Sharjah in order to explore the investment opportunities available and learn closely about the qualities of its investment environment that have succeeded in becoming a competitive destination for investors worldwide.

He added: "The Emirate of Sharjah is characterized by a sophisticated infrastructure and modern and flexible legislative laws that protect capital and economic investments, let alone its vital location as a global trade hub providing access to all regional and global markets.

Not only that but the cities and regions of the emirate are also witnessing a civilized renaissance and distinguished tourism projects, thanks to the economic diversification policy adopted by the emirate, in addition to preparing for the fourth industrial revolution and the era of artificial intelligence.

In turn, Sorin Oganisovich Vardanyan said: "The Emirate of Sharjah receives particular attention from the Russian business community. It is also one of the important destinations the Moscow Chamber seeks to penetrate its markets thanks to its diverse investment environment, as well as its encouraging commercial and economic climate.

Vardanyan underlined that this forum will shorten the distance between the two friendly countries and push relations towards new horizons that enhance areas of cooperation.

She also gave a presentation on elements of investment and the advantages offered by the Emirate of Sharjah for foreign investors and businessmen, most importantly the encouraging and promising investment climate.

The forum concluded with bilateral business meetings between Sharjah businessmen with their counterparts from the Russian side, during which the two sides discussed the available and possible areas of cooperation and the establishment of future investment partnerships, in order to benefit from the advanced technologies of both sides in the basic production sectors.