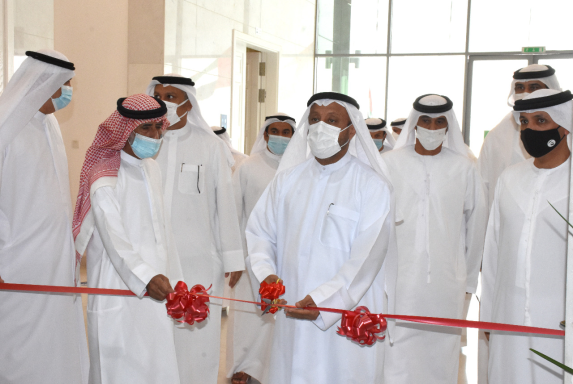 The fifth edition of the Al Dhaid Date Festival has launched at the Expo Dhaid. The four-day event is organised by the Sharjah Chamber of Commerce and Industry (SCCI) amid the participation of dozens of palm growers along with the official bodies concerned with palm cultivation. Present at the opening were, Sultan Abdullah bin Elwan, Acting Undersecretary of the Ministry of Climate Change and Environment; Abdullah Sultan Al Owais, Chairman, SCCI; Mohammed Ahmed Amin Al Awadi, Director-General, SCCI; Mohammed Musabeh Al Tunaiji, General Coordinator of the Festival; Rashid Mohair Al Ketbi, Chairman of the Screening and Evaluation Committee; Khalifa Rashid Al Tunaiji, Chairman of the Events and Theatre Committee; Jamal Saeed Bouzanjal, Head of the Media Committee; in addition to a number of officials and representatives of government agencies participating in the festival. Following the official launch of the festival, the SCCI Chairman, accompanied by a number of officials, toured the display stands and witnessed a part of the contests that kicked off today. With cash prizes amounting to AED 1.5m in total, the top of these stands at AED 30,000 while the least one is AED2000, with an AED 500,000 rise compared to the previous season. This year's edition is seeing two new categories, one for local mango and the other for yellow and red figs, in addition to other categories. Expressing his utmost gratitude to His Highness Sheikh Dr. Sultan bin Mohamed Al Qasimi, Supreme Council Member and Ruler of Sharjah, for his unwavering support for the Al Dhaid Date Festival, Abdullah Sultan Al Owais stated that Sharjah Chamber has first launched the event in 2016 in order to find an annual platform supportive of palm growers and farmers from the people of Al Dhaid city, the Emirate of Sharjah, and the UAE in general. Al Owais extended his sincere thanks to His Highness Sheikh Mohamed bin Zayed Al Nahyan, Crown Prince of Abu Dhabi and Deputy Supreme Commander of the UAE Armed Forces, for His Highness's generous support of the festival and his follow-up and encouragement of citizens to cultivate and expand the green area and ensure food security. He pointed out that the SCCI is keen to increase the momentum of the festival every year, in line with directives of the wise leadership that calls for organising value-added economic and commercial events, noting that the festival today has established itself as one of the most important social, economic, cultural, and heritage events across Sharjah and the UAE. Al Dhaid Date Festival has economic dimensions the Chamber seeks to accomplish by contributing to rising and diversifying the quality of local products, said Mohammed Ahmed Amin Al Awadi, explaining that the SCCI is working, through the development of the festival competitions and its prizes, to provide more opportunities that enable farmers to develop their agriculture and raise its competitiveness, and thus attracting more investors and entrepreneurs to establish pioneering national food industries. Al Awadi mentioned that the UAE accounts for about 30% of the global trade volume of dates, whether importing or exporting and is also among the top10 producers of dates in the world. For the fifth consecutive year, the Chamber organized this event which has gained a major foothold among date festivals in the country and the region, said Muhammad Musabeh Al Tunaiji, noting that the current edition is expected to achieve the same success of the previous seasons, thanks to the unstinting support of prudent leadership and its guidance that make everyone more determined and confidence to achieve the sought-after objectives and bring happiness to people and society.