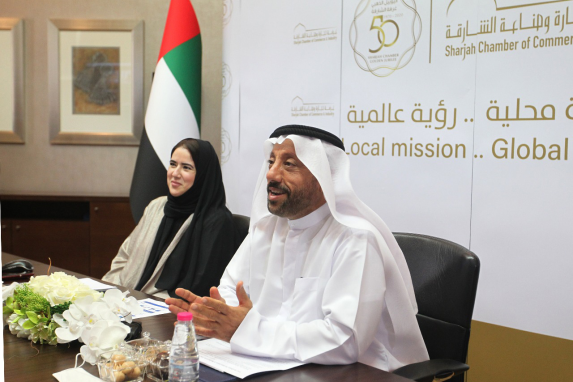 The Sharjah Chamber of Commerce and Industry (SCCI) has explored avenues of cooperation with the Austro-Arab Chamber of Commerce (AACC) to build on existing ties in the field of healthcare and education, in light of the challenges posed by the Covid-19 pandemic During a webinar titled “Adjusting to New Normal in Education and Healthcare sectors in UAE & Austria”, both sides discussed the latest local and global developments and various economic issues of mutual concern. The virtual event is the first in a series of forums to be held by the chamber as part of its initiative “‘Sharaka Experts Talk”. The online gathering was attended by H.E. Ibrahim Salim Al Musharrakh, UAE Ambassador to Austria, H.E. Abdullah Sultan Al Owais, Chairman of SCCI, and Senator Dr. Richard Schenz, President of AACC and Vice President of the Austrian Federal Economic Chamber. Also present were HE Mudar Al Khoja, Secretary-General of the Austro-Arab Chamber of Commerce, and Fatima Al Mokarrab, Director of the SCCI International Relations Department, in addition to other senior officials representing relevant government and private bodies from both countries. Lauding the deeply rooted Austro-UAE relations, Al Musharrakh stressed the UAE’s keenness to build bridges of communication and embrace promising plans that would help take the country’s bilateral, regional and international relations to new heights. “In addition to reviewing existing areas of cooperation in the educational and health care sectors, we had the opportunity to discuss ways of enhancing our relations in light of the Covid-19 repercussions that left nothing unaffected including the educational process,” Al Musharrakh said. For his part, Abdullah Al Owais affirmed that the UAE health sector is being given the utmost attention and tops the priorities of the government’s agenda and strategies for the next 50 years. “Thanks to its economic policies and legislations that stimulate investments in the health sector, the UAE has been professionally and effectively able to contain the Covid-19 pandemic; and accordingly it ranked first regionally and globally in many indicators, especially in terms of implementing the highest international standards while conducting Covid-19 tests and inoculating the vast majority of people living on its territories,” Al Owais said. “Although pandemic has left nothing untouched, the UAE has exceptionally run the educational sector thanks to the digital learning system, which is currently being supported and nurtured by the government to keep pace with the expected changes in this field. Unsurprisingly, the UAE’s educational sector has attracted quality investments, something which will reflect positively on the educational technology market in the UAE, whose volume is expected to reach $40 billion by 2022, according to a report issued by the Dubai Future Foundation, entitled "Life After Covid-19: Education", Al Owais added. Speaking during the event, Senator Schenz said emphasised that the UAE, and Sharjah in particular, are a strategic economic partner for the Austrian business community, adding that their strong cooperation can be utilized to strengthen trade and investment ties between both countries. He expressed his thanks to the Sharjah Chamber for organizing the webinar that brought together entities interested in developing bilateral cooperation in the education and health care sectors, describing the event as a springboard towards a promising future of economic partnerships and future projects that achieve mutual goals and serve the interests of the two friendly countries. During the webinar, Fatima Al Mokarrab delivered a presentation highlighting the SCCI’s efforts and initiatives launched during the pandemic to support the education and health care sectors, including donating 120 computers to support distance learning in several educational and training institutions, as well as transforming the Expo Centre Sharjah into a field hospital and allocating part of the centre to administer the COVID-19 vaccines.