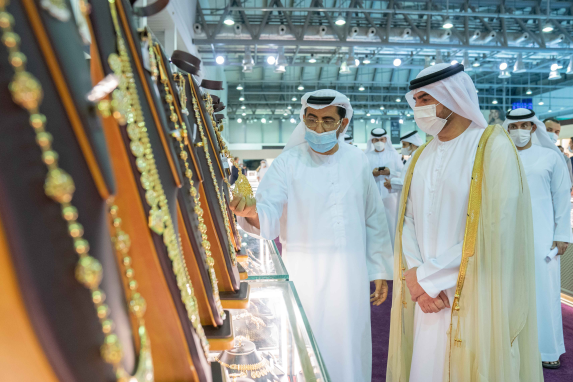 H.H. Sheikh Abdullah bin Salem bin Sultan Al Qasimi, Deputy Ruler of Sharjah, inaugurated the second edition of the "Jewels of Emirates" show, held under the theme, "Glamour of Beauty," with the participation of over 100 domestic companies. The event is being organised and hosted by the Expo Centre Sharjah, with the support of the Sharjah Chamber of Commerce and Industry (SCCI). Sheikh Abdullah toured the event’s exhibition halls, where he visited the latest gold and jewellery collections and met with exhibitors and national pavilion officials, who briefed him about the UAE’s gold industry. He was accompanied by Abdullah Sultan Al Owais, Chairman of the SCCI and Chairman of the Board of Directors of the Expo Centre Sharjah, as well as members of the chamber’s board of directors and the centre’s staff, along with Saif Mohammed Al Midfa, CEO of the Centre, Mahmoud Youssef Al Jarrah, Secretary-General of the Arab Union for International Exhibitions and Conferences, Abdullah Abdel Fattah, Director of the Exhibitions Palace in Mauritania, and Sultan Shattaf, Director of the Sales and Marketing Department at the Centre. The launch was also attended by several government officials, members of the diplomatic corps, and representatives of the gold and jewellery sector. Sheikh Abdullah said that the centre’s success in attracting many leading local gold and jewellery brands and gold and watch designers confirms the importance of the event, which enables them to enhance their presence in local and regional markets. He also lauded the efforts of the SCCI and the centre to revitalise the exhibition industry and organise such innovative events, which will strengthen Sharjah's position as a major city that leads the industry in the region. Sheikh Abdullah commended the visions and directives of H.H. Sheikh Dr. Sultan bin Muhammad Al Qasimi, Supreme Council Member and Ruler of Sharjah, who always calls on those concerned to improve the emirate’s economic environment, support its business sectors, attract investment and facilitate commercial movement. He then thanked the event’s organising committee for providing the best services to exhibitors, as well as for their keenness to apply the strictest precautionary and preventive measures to ensure the health and safety of the public. The show, which is the first Emirati exhibition specialising in diamond jewellery, gold jewellery, silver jewellery, pearls and gemstones, luxury watches, perfumes and fragrances, offers a unique platform for showcasing traditional and modern gold and silver sets and the latest watch, diamond and gemstone designs. It also includes a special section for famous local perfume and fragrance brands and Arab and international scents.