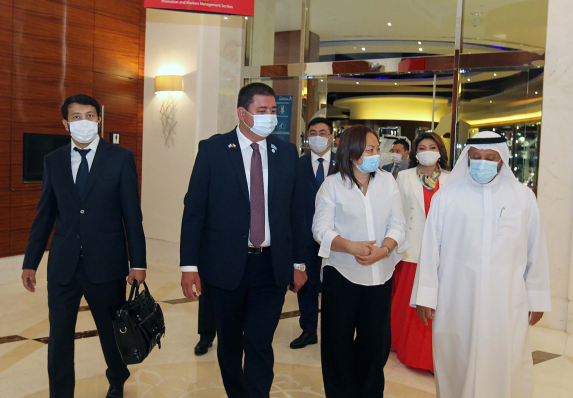 The Sharjah Chamber of Commerce and Industry (SCCI) discussed ways to strengthen economic cooperation, develop trade relations and mutual investment between the Emirate of Sharjah and the Republic of Kazakhstan, during the visit of a high-level delegation from the country at its headquarters. The two sides discussed strengthening cooperation in many areas, and promising investment opportunities, especially in tourism, agriculture and various economic sectors. The delegation was received by Abdullah Sultan Al Owais, Chairman, SCCI, in the presence of several other dignitaries, focusing on discussing the reality of economic relations, the current and prospects for future partnerships in a way that enhances bilateral relations and supports the interests of the business communities on both sides, and opens doors to more opportunities for economic cooperation, trade exchange and investment projects between Sharjah and Kazakhstan. Al Owais welcomed the Kazakh delegation and reviewed the economic potential of the UAE in general and the Emirate of Sharjah in particular. He called on Kazakh businessmen to invest in Sharjah and take advantage of the pioneering industrial and commercial privileges in the region. He expressed the SCCI's willingness to raise the level of trade and investment relations between the two countries and continue joint coordination with the Kazakh side, to cooperate in various economic sectors. The Kazakh delegation members affirmed their country's keenness to enhance fruitful cooperation at all levels with the emirate, especially in light of the strong economic and trade relations existing between the two countries. The total flow of investments from the UAE to Kazakhstan, from 2005 to 2020, amounted to nearly US$2.4 billion, while the volume of trade exchange between the two countries in 2020 was nearly $474.4 million.