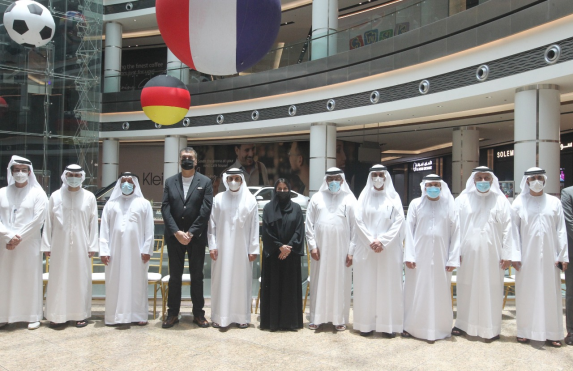 A delegation from the Sharjah Chamber of Commerce & Industry (SCCI), headed by HE Abdullah Sultan Al Owais, Chairman, SCCI, recently visited Sahara Centre, the ultimate lifestyle destination in the UAE, to learn closely about the new expansion project, located in the west wing of the mall.

The visit falls within the SCCI's commitment to strengthening communication with all economic facilities and sectors in Sharjah.

The delegation included HE Waleed Abdul Rahman Bu Khatir, SCCI Second Vice Chairman, a number of members of the Chamber’s Board of Directors, HE Mohammed Ahmed Amin Al Awadi, Director-General of the SCCI, HE Saif Mohammed Al Midfa, CEO of the Expo Center Sharjah, and Ibrahim Rashid Al Jarwan, Director of the Economic Relations and Marketing Department, SCCI.

They were received by Akram Ammar, Sahara Centre Executive Director, and Pierre Semaan, Director of Marketing, where they were briefed on the services offered by the new expansion, including an exceptional number of outlets, entertainment areas, and various dining outlets.

Abdullah Sultan Al Owais said the visit is part of the SCCI's keenness to constantly follow up on the affairs and interests of the economic sectors in the emirate. The chamber always seeks to exchange views with the business community in a way that serves their interests and bolsters the growth and prosperity of the Sharjah economy, he added.

Al Owais underlined that Sahara Centre is among the most important shopping and tourist destinations across Sharjah and UAE. He congratulated the Centre management on the new expansion which represents a qualitative addition to the shopping sector through the presence of globally renowned brands.

For his part, Akram Ammar, Sahara Centre Executive Director, thanked the Chamber for its ongoing support to the interests of the shopping centers sector, stressing that the center aims, through these renovations, to enhance the customer experience via diverse retail and dining outlets.

Aside from being home to an exceptional number of outlets, the new expansion is also offering new leisure and dining options. It will also feature a dedicated floor for cosmetics and aesthetics-related products and services, including spas, beauty product shops, salons, fragrance outlets, and cosmetics centers, among others.