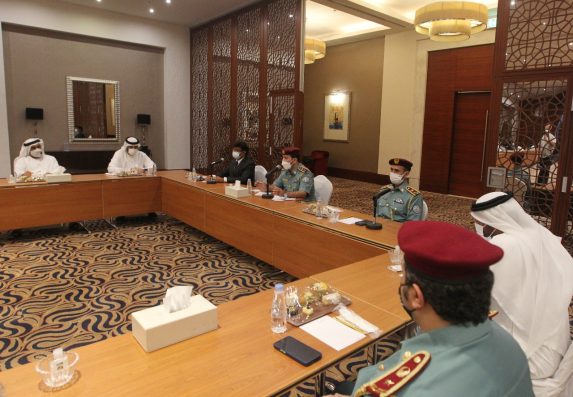 The Representative Committee of the Industry Sector Business Group of the Sharjah Chamber Commerce & Industry (SCCI), in cooperation with the Sharjah Police General Command, organized on Wednesday the second introductory session on the security measures of the industrial facilities in the Emirate of Sharjah.

The session falls within the awareness campaign launched under the theme "Your business safety is a key to thrive" and aims to raise awareness among owners of industrial establishments about security measures to reduce crime rates and increase the feeling of safety.

The meeting held at the SCCI headquarters and was attended by HE Lt. Colonel Jassim Al Suwaidi, Head of the Community Policing Department, HE Lalu Samuel, Chairman of the Representative Committee of the Industry Sector Business Group, Lt. Col. Muhammad Al Shamsi, Head of Criminal Investigation Department, Sharjah Police, and Amjad Awad Al-Karim, Head of the Business Groups Section, SCCI.

Lt. Colonel Jassim Al Suwaidi pointed out the most important measures that will be carried out throughout the campaign running until the end of this year, noting that the role of the police is protective and awareness at the same time, with the aim of limiting the poor practices and negative phenomena, in addition to monitoring the security measures adopted by various facilities in the emirate.

Al Suwaidi underlined the keenness of Sharjah Police to support the business community in the emirates, lauding the strategic partnership between Sharjah Chamber and Sharjah Police and the fundamental role of the Chamber in delivering the awareness messages to the owners and employees of the industrial units and facilities.

He called on everyone to collaborate with the security bodies and concerned parties and to abide by all the recommendations that mainly serve their public interest so that Sharjah will remain an oasis of peace and security.

For his part, Lalu Samuel noted that the SCCI is keen to provide all the support for the campaign, as part of its commitment to fostering joint action and launching initiatives that help achieve security stability fir across all sectors in the Emirate of Sharjah.

Samuel highlighted the SCCI's role in the campaign, which includes listing the establishments and companies in the targeted industrial zones, which reach 8000 facilities, communicating and coordinating with companies, preparing for holding awareness-raising workshops and lectures, and sending requirements for the CCTV systems and protection of the installations.

Lt. Colonel Mohammed Al Shamsi presented some important tips for the owners of the installations, which include installing CCTV systems in and out of the facility, hiring qualified and well-trained security companies, installing an appropriate lighting system and motion sensor lights, in addition to not leaving the items or goods unprotected or outside the unit and installing high-security locks.

Al Shamsi outlined the roles entrusted to the Sharjah Police in the campaign, which include identifying the targeted industrial areas, providing awareness workshops and lectures, following up on the requirements for the security of facilities, as well as keeping an eye on the incoming reports and security information to curb crimes and negative behaviors.