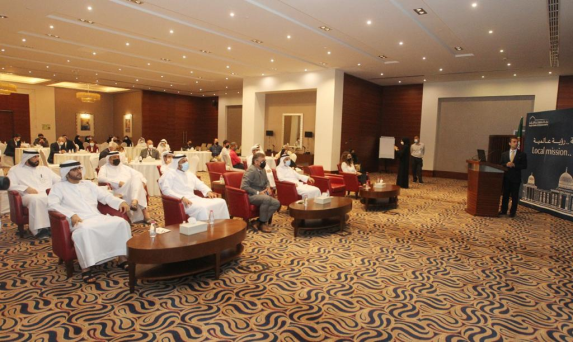 The Sharjah Chamber of Commerce & Industry , in collaboration with the Portugal Global - Trade & Investment Agency (AICEP), the Sharjah-Portugal Business Forum, which aims to highlight joint investment opportunities and explore prospects for cooperation and bilateral partnerships in various economic sectors. The forum is also considered a perfect opportunity for businessmen in both countries to meet and discuss potential cooperation opportunities.

The forum comes in the wake of the Chamber's reception of a delegation from the Association of Wood and Furniture Industries (AIMMP).

Also attending were a crowd of Portuguese and Emirati businessmen specializing in the timber industry and other industries, representatives of the Sharjah Airport International Free Zone Authority and the Sharjah Investment and Development Authority "Shurooq", and SCCI department directors.

While welcoming the visiting delegating, Abdul Aziz Shattaf said the meeting is one of a series of meeting between the official and commercial delegations in both countries, which culminated in the launch of the Portuguese Business Council last January, in addition to dispatching an official and trade mission to Lisbon in 2018 and welcoming the Portugal Global - Trade & Investment Agency (AICEP) last October.

The UAE-Portuguese economic relations have witnessed great development and progress during the past years. The total volume of foreign trade amounted to 358.3 million US dollars until the year 2019, and the volume of imports amounted to about 222 million dollars," added Shattaf, pointing out that Portuguese investment sectors in the UAE are qualitative sectors specialized in real estate, transportation, warehousing, construction, scientific and technical fields, and retail trade, while the Emirati investments in Portugal were focused on petroleum, power generation and exploration for oil and natural gas.

The volume of non-oil trade exchange between the two countries during the past 10 years amounted to about 2,894,300,000 billion dollars, while the mutual visits and trade missions were crowned with the signing of about 13 strategic partnership agreements, he stated.

Lauding the warm reception and the efforts made by the SCCI to make this event happen, Daniel Pontas noted that the volume of the Portuguese exports to the UAE amounted to about 173 million euros, and 42 million euros are exports from the UAE to Portugal, while 1,029 Portuguese companies are exporting their products to the UAE.

He underlined that the UAE in general, and the Emirate of Sharjah in particular, is an ideal economic partner for the Portuguese business community, commending the competitive advantages and various privileges the Sharjah's business environment provides to foreign businessmen and investors.

The Director of the Sharjah Investors Services Center, Marwan Saleh, gave a presentation on Sharjah's unique investment components and qualities and the stimulating nature of its business climate, stating that the emirate is home to $220b foreign investment, which contributed to the creation of about 1117 new jobs.

Sharjah Airport International Free Zone (SAIF Zone), said our participation in such international forums comes as part of our strategy aimed at enhancing our networking with companies and institutions worldwide and introducing our unique advantages to investors and businessmen, adding that SAIF Zone is home to more than 7,500 companies and provides enormous benefits to those willing to launch their investment in a safe, stable, and world-class business environment, including 100% foreign ownership of businesses and 100 percent corporate or personal income tax exemptions.

The forum included a number of bilateral business meetings which focused on exploring partnerships, cooperation, and mutual coordination, and potential investment opportunities.