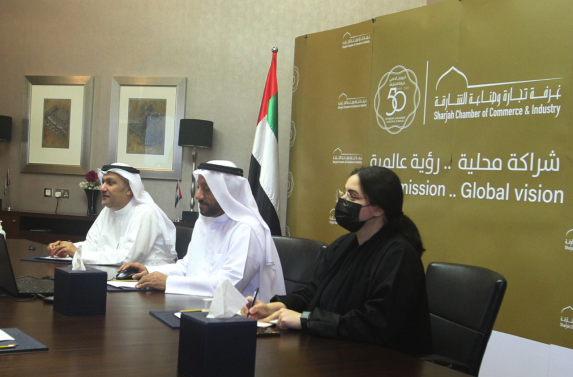 The Sharjah Chamber of Commerce and Industry (SCCI) recently held a virtual meeting with the Consulate-General of the Republic of South Korea in Dubai to explore ways to discuss economic cooperation in various vital sectors in the two countries and explore the potential investment opportunities and the mechanisms of increasing trade volume between them. The meeting was attended by Abdullah Sultan Al Owais, Chairman of the SCCI, Chun Young-Wook, Consul-General of the Republic of South Korea in Dubai, in the presence of Mohammed Ahmed Amin Al Awadi, Director-General of the SCCI. Stressing the importance of such a meeting to enhance communication between business communities in the two countries and take advantage of available opportunities to take the bilateral relations to new heights especially in the economic sector, Abdullah Sultan Al Owais invited the South Korean side to actively take part in the international events and exhibitions organised by the Expo Centre Sharjah, such as SteelFab and WJMES exhibitions. Al Owais stated that Expo Dubai 2020 is an important opportunity for South Korea to share its vision with the visitors and participants in this major event, emphasising the need to develop bilateral relations in a lot of fields, especially in the common interest ones such as the technologies of the Fourth Industrial Revolution and artificial intelligence. Young-Wook commended Sharjah's economic development in various fields, stressing the consulate's interest and willingness to collaborate with the SCCI in all sectors that support the development of relations between the two countries. Young-Wook referred to his country's interest in boosting the economic and investment ties between the private sectors in both countries and establish robust economic ties with the SCCI and the companies operating in Sharjah, highlighting the need to organise meetings for Emirati and South Korean investors and businessmen and to participate in specialised fairs. Al Awadhi said that there are many potential economic and investment opportunities, especially in areas of common interests such as the knowledge-based economy. He pointed out the strategic location of both countries and its importance in establishing several partnerships in information technology and electronic industries. He called on the South Korean companies to tap into Sharjah's sophisticated industrial infrastructure.