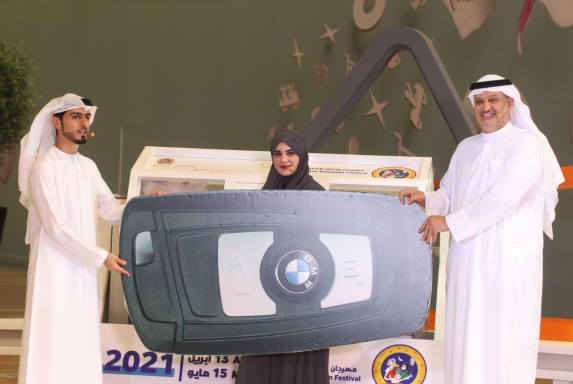 The 31st Sharjah Ramadan Festival, organised by the Sharjah Chamber of Commerce & Industry (SCCI), came to an end after achieving an outstanding sales volume surpassing AED 700 million sales. The final raffle draw, which was held at City Centre Al Zahia, witnessed the winning of Dina Al Sayed, Egyptian, and Abdullah Awad, Jordanian, with 2 BMW cars. In addition, 20 shoppers won shopping vouchers worth AED 5000 and 2500, 10 shoppers won AED 1000 cash prizes, and 5 shoppers won 5 Samsung mobile phones. Expressing happiness with the overwhelming success of the 31st edition of the Festival in terms of achieving high sales and attracting over 2000 shopping malls and retail stores to take part in the event, HE Abdullah Sultan Al Owais, Chairman of the SCCI, pointed to concerted efforts of the organising bodies to bring this exceptional success to the event which has become not only a shopping season but also a recreational, social, and cultural event that meets the needs of all society segments. Al Owais highlighted the substantial role of the Sharjah Ramadan Festival in supporting the private sector, revitalizing the retail sector, and boosting the competitiveness between shopping centers to offer shoppers fantastic deals and exclusive discounts. "The feedback we received throughout the Festival was very positive whether in terms of the retailer satisfaction or the high turnout or the sales volume," said HE Mohammed Ahmed Amin Al Awadi, Director General of the SCCI, stressing the Chamber's eagerness to introduce new activities and events in the coming seasons to further enrich the Festival, in addition to launching more innovative and attractive events with worthy prizes in cooperation with the business sectoral groups. Lauding the fruitful cooperation of all public and private sectors in Sharjah to make this event successful, Jamal Bu Zinjal, General Coordinator of the Festival, expressed special thanks to Sharjah TV for the outstanding coverage of the festival events and activities, noting that the valuable prizes offered by the SCCI and the shopping centers played a significant role in wooing a large number of shoppers and visitors from across the country to get the most out of the awesome deals, the big discounts in a wonderful festive atmosphere during the Holy Month of Ramadan.