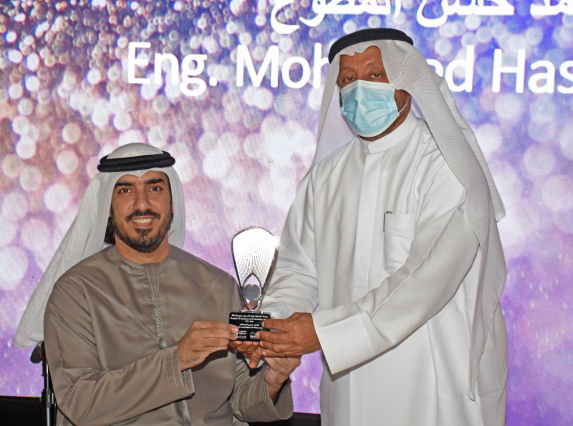 Sharjah Chamber of Commerce and Industry (SCCI) celebrated the first winner of the Sharjah Award for Entrepreneurs with Disabilities 2020-2021, Engineer Mohammed Al Mutawa, owner of the "Barista Vibes" project. This came in a ceremony held, on Monday, at SCCI's headquarters, where the winner was honoured with a prize of 50 thousand dirhams in appreciation of his success in managing his project. This category is part of the Sharjah Excellence Award recently launched by SCCI, with the aim of supporting and developing the entrepreneurship sector in the Emirate of Sharjah. In addition to giving people with disabilities special attention and in commitment to the principles of social responsibility. His Excellency Abdullah Sultan Al Owais, Chairman of Sharjah Chamber of Commerce and Industry (SCCI), congratulated the winner of the Sharjah Award for Entrepreneurs with Disabilities, and pointed out that SCCI’s launch of the award came in line with the vision of His Highness Sheikh Dr. Sultan bin Mohamed Al Qasimi, Supreme Council Member and Ruler of Sharjah. His Excellency Al Owais called on Eng. Mohammed Al Mutawa to continue the march of excellence to remain a model to be followed in creativity and innovation in UAE. During the ceremony, the winner, Mohammed Al Mutawa, reviewed his experience in the world of entrepreneurship, and his success in establishing three branches of his brand, all of which achieved success in the business community. Al Mutawa expressed happiness for being honoured, appreciating the efforts of SCCI in supporting entrepreneurs.