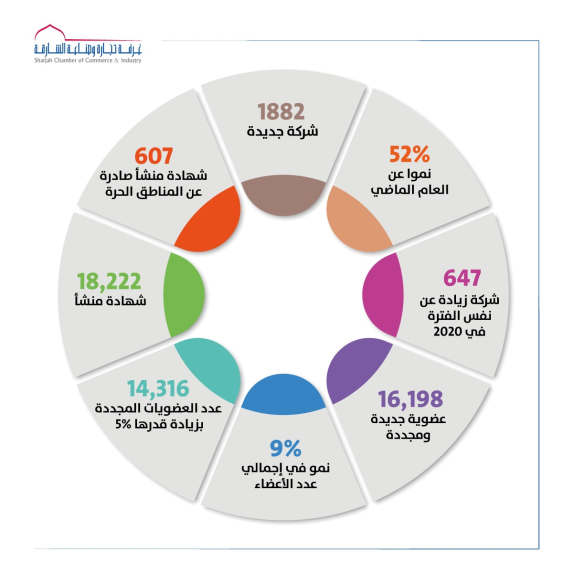 The Sharjah Chamber of Commerce & Industry (SCCI) has recently issued its first quarterly report on the activities and statistics of the chamber and its branches in Khor Fakkan, Kalba, Al Dhaid, and The report showed that 1882 new companies joined Sharjah’s business community during the first quarter of 2021, a rise of 52% (647 companies) compared to the previous year, something which clearly reflects the global demand for Sharjah’s business environment.

The Chamber has also further strengthened its position as one of the largest chambers of commerce in the Middle East and North Africa after it recorded a growth of 9% in the total number of its members compared to the same period last year, an increase of 1377 memberships, as the total number of new and renewed members reached 16,198 compared to 14821 last year. The number of renewed memberships reached 14,316, an increase of 5%, while the number of certificates of origin issued reached 18,222 and 607 certificates for free zones.

Commenting on the positive figures included in the report, HE Mohammed Ahmed Amin Al Awadi, Director-General, SCCI, said: "The surge in the number of new memberships is yet another testament to the rising confidence by global investors in Sharjah's business environment, thanks to the availability of all components of success, development, and institutional growth. These figures also clearly reflect the stellar performance and the substantial role of the SCCI in providing cutting-edge services to support its members and their businesses.

Al Awadi expressed optimism that infrastructure development projects, roads, and development projects recently inaugurated by His Highness Sheikh Dr. Sultan bin Muhammad Al Qasimi, Supreme Council Member and Ruler of Sharjah, in Khor Fakkan, Kalba, and Dibba Al-Hisn will significantly contribute to increasing the inflows of direct foreign investments to Sharjah and the growth of the economic and commercial movement.

“The National Strategy for Industry and Advanced Technology Operation 300bn (Project 300 billion) would help advance the industrial sector, thus increasing our new members and the investors wishing to set up their businesses in Sharjah to tap into this significant and strategic development,” he concluded.

During the first quarter, the SCCI received and met with delegations from around the world. In addition, the Chamber has embarked on upgrading its contact center, which includes a massive database on the Chamber’s business and aims to enhance networking with the members via digital technologies to improve the services provided and help the chamber's concerned parties develop future economic feasibility studies and projects.

The Chamber has also announced the completion of almost 85% of the 10th industrial zone infrastructure reconstruction, which is being carried out in cooperation with the relevant government authorities.