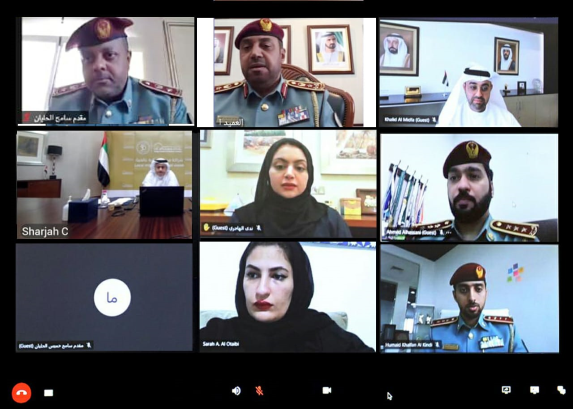 Under the patronage of H.H Sheikh Sultan bin Mohammed bin Sultan Al Qasimi, Sharjah Crown Prince, Deputy Ruler, and Chairman of the Sharjah Executive Council (SEC), the Sharjah Chamber of Commerce & Industry (SCCI), in partnership with Sharjah Police General Command, has launched the Sharjah Award for the best facility conforming to security standards. The newly launched award is part of the Sharjah Excellence Award, one of the SCCI’s initiatives launched in 2016.

Targeting large and medium enterprises in the Emirate of Sharjah, the award aims to stimulate the targeted facilities to comply with security and safety requirements and standards, as this would help maintain the sustainability of economic activities and enhance trust between government agencies and private sector enterprises.

Also attending were members of the Board of Trustees of the award, including H.E Khalid Jassim Al Midfa, Chairman of the Sharjah Commerce and Tourism Development Authority, Dr. Salah Taher Al Haj, Vice Chancellor for Community Affairs, University of Sharjah, Lalu Samuel, Chairman of the Representative Committee of the Industry Sector Business Group, and a number of department heads and directors from Sharjah Police.

Stressing the SCCI’s keenness to collaborate with its strategic partners to upgrade the award categories so that they can play a greater role in stimulating business communities to achieve sustainable economic growth by honoring the outstanding achievements, Mohammad Ahmed Amin Al-Awadi explained that the launch of the new award category would help cement the status and role of the Sharjah Excellence Award as one the most prestigious and recognition awards for the distinctive economic establishments across the region.

Lauding the tremendous efforts of Sharjah Police in establishing security and creating a stable environment that empowered the private sector to have a constructive and impactful role in the process of building and promoting the Sharjah economy, Al-Awadi called upon the emirate's business community to participate in the award and get the most out of its numerous benefits and advantages to level up their businesses and build a thriving and prosperous society.

Abdullah Mubarak bin Amer said: “Our goal is to encourage the establishments and urge them to adhere to the implementation of all security and safety requirements and standards. This would ensure the achievement of economic sustainability as a key pillar of security, safety, and social responsibility.”

Bin Amer pointed to the significance of the award in identifying the reality of security requirements in commercial, industrial, and other sectors so that all the concerned parties remain ready to deal with the usual or emerging security challenges.

He underlined Sharjah Police’s commitment to backing pillars of the emirate’s economic, commercial, and industrial progress, owing to the importance of the security component in pursuing the march of achievements, which confirms that the secure and safe environment is the permanent umbrella and the main catalyst for prosperity and progress.

Nada Al-Hajri shed light on the numerous advantages and benefits the new Award offers to the participating enterprises. This includes a Sharjah Chamber one-year free membership certificate, 50% off on fees for the use the facilities of the World Trade Club at the SCCI headquarters, free of charge advertising page in the Chamber’s trade" magazine, special fees for participation in Sharjah Expo Center exhibitions and events, free exhibition space in the external events the SCCI take part in, along with free tickets and accommodation, special fees for advertising in Sharjah Radio and TV, and adding the names of winning enterprises to the lists of important establishments in government departments in the Emirate of Sharjah.

Al-Hajri noted that the registration is now open until September 2021 through the Sharjah Excellence Award website.

Capt. Hamid Khalfan Al-Kindi, Head of the Institutional Excellence Department at the Strategy and Performance Development Department of Sharjah Police, gave a presentation on the criteria of the Sharjah Award for the best facility complying with security standards. This includes three main criteria: security and safety, economic sustainability, and social responsibility.

The first criterion, security and safety, includes sub-standards and procedures that enhance security monitoring, and compliance with civil protection and safety regulations and requirements, adherence to the laws, regulations and decisions regulating residency affairs in the country, and the implementation of standards regulating the relationship between employers and workers, while the second criterion consists of four sub-standards, including; the existence of a pioneering business model for the facility that contributes to strengthening the state's economy, applying corporate governance systems to achieve economic sustainability, the facility’s role in achieving competitive and lading values in the country and its role in supporting economic development.