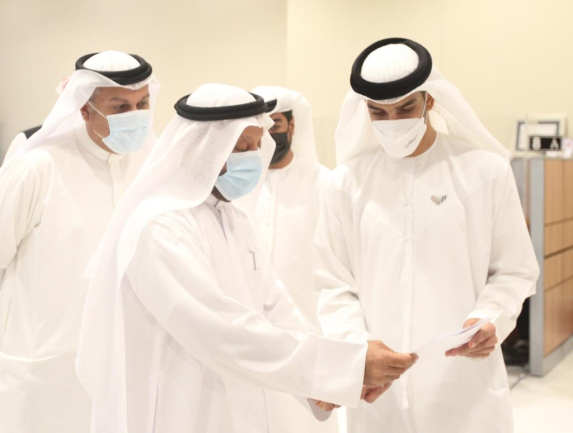 H.E Dr. Thani bin Ahmed Al Zeyoudi, Minister of State for Foreign Trade, emphasized the importance of supporting the products of Emirati companies, expanding logistics networks and diversifying the state’s foreign markets, and launching initiatives that bolster the leading position of the private sector in the foreign trade.

Al Zeyoudi’s statements came on the sidelines of his recent visit to the Sharjah Chamber of Commerce and Industry (SCCI) to enhance the mutual cooperation and coordination in attracting foreign companies and investors to the country and to support the export business in the UAE.

During his visit, Al Zeyoudi was briefed on the most important service the Chamber provides to its members and the most prominent future trends the SCCI intends to carry out in the upcoming stage.

Congratulating the Sharjah Chamber on its 50th anniversary, Al Zeyoudi hailed the contribution of the SCCI to the UAE’s gross domestic product (GDP) that amounted to AED 100 billion in 2019, something that clearly reflects the substantial role of the Chamber and the affiliated companies in supporting the national economy, given the fact that Sharjah is home to 1800 factories.

He explained that the visit comes as part of the periodic visits carried out by the Ministry of Economy for all the state’s chambers of commerce and industry to step up efforts, especially in terms of attracting foreign companies and investors to the UAE, stressing that the ministry will work shoulder by shoulder with the SCCI to achieve economic diversity and resilience, as well as to enhance the competitiveness of the state's economy.

Welcoming the Minister and the accompanying delegation, Abdullah Sultan Al Owais lauded the Ministry of Economy’s efforts in supporting the business sector and enhancing the investment environment, and diversifying its attractive components, stressing the SCCI’s keenness to expand the partnership with the Ministry to avail of the services provided and to enhance coordination and cooperation to achieve economic growth and development and to strengthen the confidence in the business community locally, regionally and globally.

Mohammed Ahmed Amin Al Awadi highlighted the SCCI’s role as an advocate for the interests of the business community in Sharjah through many initiatives and programs, including the “Sadder” (export) Fund, the first of its kind across the Emirate Sharjah for financing export operations, which aims to increase the rate of exports, open new markets, expand the export map of the SEDC’s affiliates, provide liquidity to exporters, and reduce the risk ratio in export operations through credit insurance, the Small & Medium Enterprises Center (Tijarah 101), one of the SCCI’s initiatives to support and motivate young people to engage in commercial and economic business, and the Social Responsibility Platform, with more than 11,000 private sector shareholders on this platform.

Fatima Al Mokarrab, Director of the SCCI International Relations Department, threw light on the Chamber’s role in promoting international relations, with the signing of over 185 MoU with 35 countries worldwide and the receiving of 100 international delegations, in addition to dispatching 14 trade missions in 2019, organizing diplomatic tours for ambassadors and consuls, and launching several business councils, the last of which was the Portuguese Business Council.