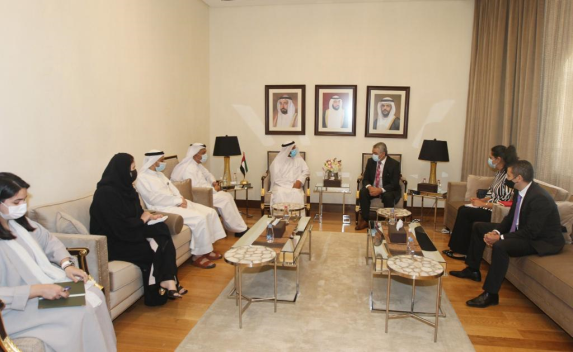 The Sharjah Chamber of Commerce & Industry (SCCI) on Wednesday received a delegation from the Tunisian Consulate in Dubai to discuss enhancing bilateral commercial and economic ties and to explore the investment opportunities available for business communities in the two friendly countries.

The meeting was held in the presence of HE Abdullah Sultan Al Owais, Chairman, SCCI, HE Shahir Dajbi, Consul General of the Republic of Tunisia in Dubai, and HE Mohammed Ahmed Amin Al Awadi, Director General of the SCCI.

Welcoming the visiting delegation, Al Owais highlighted Sharjah’s competitive advantages as a leading global business destination, thanks to its sophisticated infrastructure and its attractive business environment, where Industry, trade, tourism, and business tourism are key pillars of the emirate's economy.

Al Owais made it clear that the Chamber is always keen to expand its partnerships network with all countries, especially with the friendly Arab countries at industrial and commercial levels, to get the most out of the available opportunities and resources and to ramp up the volume of the intra-regional trade, expressing the Chamber’s full readiness to provide Tunisian businessmen and investors with all support and facilities to kick off their investments in Sharjah.

Lauding the SCCI’s substantial role in strengthening trade relations between Sharjah and Tunisia, Shahir Dajbi stressed that such bilateral meetings would help promote the commercial ties and facilitate practicing businesses, calling on the Emirati companies to start their investment journey in Tunisia, which is bursting with numerous investment opportunities in the industry, food, construction, construction, and agriculture sectors.

For his part, Mohammed Ahmed Amin Al Awadi reiterated the importance of these meetings in exchanging experiences and in holding various partnerships, inviting Tunisian companies to take part in the exhibitions hosted and organized by Expo Centre this year.

Al Awadi said that the Chamber attaches special importance to the cooperation with the countries of the African continent, especially the sisterly Arab countries in North Africa, noting that the volume of non-oil trade exchange between the UAE and Africa amounted to $ 40.7 billion during the first nine months of 2020, compared to $ 36.9 billion for the same period in 2019.