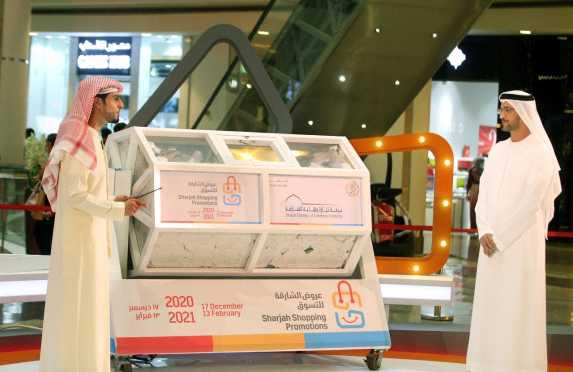 The 2nd edition of the Sharjah Shopping Promotions, which is organized by the Sharjah Chamber of Commerce and Industry from December 17 to February 13, has boosted the sales of the participating malls and stores by 20%. This is according to the recent reports which revealed a spike in the number of gift vouchers and shoppers who are taking part in the weekly raffles on AED 2 million for 120 winners.

The activities of the 2nd week of the raffles, which was held at Sahara Centre Mall, saw the winning of the Emirati Nasser Al-Wali with a Mini Copper car, while a large number of shoppers won cash prizes and gift vouchers ranged from 3000 – 5000 AED.

In this regard, the SCCI said that a bunch of surprises is still waiting for fortunate shoppers, including 5 premium cars that will be handed over through the weekly live show on Sharjah TV at 8 pm, in addition to high-end perfumes and bikes of up to AED 300,000. Shopping malls also announced that they will offer 4 cars and attractive discounts on the most famous brands and products.

Jamal Bu Zinjal, Assistant General Coordinator for Sharjah Shopping Promotions, said: “The spike in the sales of the participating malls and stores reflects the SCCI’s vision to revitalize the economic activity in the Emirate of Sharjah, thanks to the emirate’s robust infrastructure that helps in ensuring the success of such events.”

Bu Zinjal lauded the efforts exerted by the organizing committee and the fruitful cooperation with government bodies, underlining that the advertising campaign of the Promotions has paid off, something which is evident in the heavy turnout and the increase in the sales of the participating stores.

Hana Al Suwaidi, Head of the Festival and Exhibitions Department, pointed out that the weekly raffles were distributed in a proper way to further attract and encourage shoppers to take part in the Promotions, highlighting the important role of the advantages and incentives provided by the SCCI in increasing the number of malls and stores participating in the campaign.

The upcoming raffles will be held at Mega Mall, City Centre, Zawaya Walk, and will be concluded at Al Majaz Waterfront, with the strict implementation of precautionary and preventive measures to maintain public health