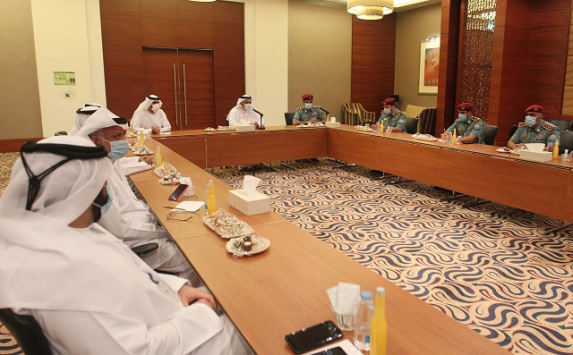 The Sharjah Chamber of Commerce & Industry, SCCI, held a coordination meeting with the General Directorate of Sharjah Police to shed light on the outcomes of the first phase of “Noor Al Sharjah” initiative (light of Sharjah), an initiative launched by Sharjah Police in cooperation with Sharjah Municipality, Sharjah Electricity, Water and Gas Authority, Department Of Town Planning and Survey, and the Representative Committee of the Real Estate Sector of the SCCI. About 474 lighting units have been installed in residential buildings in Al Nahda area, while the survey conducted by Sharjah Police following the completion of the first phase found that there’s a rise in the satisfaction of Nahda residents with the installation of streetlights to 92.9% The meeting was attended by HE Mohammed Ahmed Amin Al Awadi, Director General of SCCI, Lt. Col. Ahmed Al Marri, Director of the Community Police Department at Sharjah Police; Obaid Abdul Rahman Al Mazloum, Director of the Real Estate Projects Regulatory Department at the Real Estate Registration Department, Saeed Ghanim Al Suwaidi, Chairman of the Representative Committee of the Real Estate Sector Business Group, and representatives of several departments from SCCI and Sharjah Police. Praising the efforts of Sharjah Police in making this initiative successful, Mohammed Ahmed Amin Al Awadi pointed to the Chamber’s keenness to launch initiatives that meet the business community, especially that “Noor Al Sharjah” initiative is focusing on the streets of the emirate’s industrial zones to enhance stability in the commercial and industrial sectors. Al Awadi stressed the Chamber’s commitment to providing all the support for making this initiative successful, whether through the implementation or through the coordination with the concerned parties to spread the initiative across the other districts and streets of the emirate as part of the social responsibility values. “Noor Al Sharjah initiative comes in line with the vision of the Ministry of Interior to become the UAE among the best countries in the world in terms of achieving security and safety,” said Lt. Col. Ahmed Al Marri, “The results of the first phase are very satisfactory despite the challenges and we can feel the comfort and reassurance of the residents of these areas.” Thanking the SCCI for the rapid response to the initiative, Al-Marri underlined that the initiative would help curb crime rates and increase security levels across the emirate. Saeed Ghanim Al Suwaidi said: “We, at Representative Committee of the Real Estate Sector, are fully ready to provide all the support for the implementation of the second phase of the initiative by communicating with landlords and urging them to light up residential towers and commercial and industrial units to pave the way for spreading the initiative across other districts in the emirate. Al Suwaidi highlighted the significance of the “Noor Al Sharjah” initiative in stimulating investments in the real estate sector since security and reassurance are one of the most important factors for creating an appropriate investment climate.