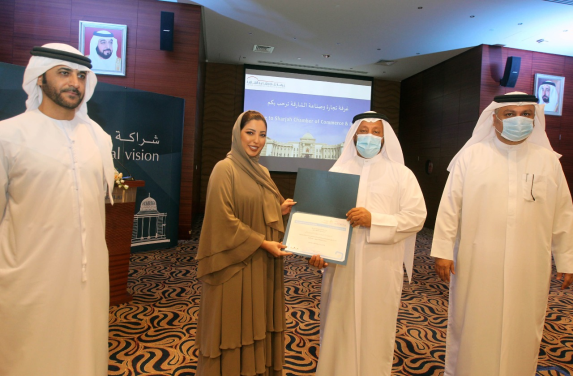 Sharjah Chamber of Commerce and Industry organized a ceremony to honor  strategic partners from government and private sectors taking part in the Sharjah Shopping Promotions campaign, exceptionally organized and themed “Smile, you are in Sharjah”, July 22 to August 21, with the aim of stimulating the economic and the retail trade sector in particular, in addition to  enhancing consumer confidence and increasing the number of visitors to retail outlets in all cities of the emirate, as the ceremony included a number of representatives of government and private departments and agencies, as part of the Chamber’s endeavors to strengthen relations with its partners and making the campaign’s activities a success.

The ceremony was held in the main building of Sharjah Chamber and was attended by HE Abdullah Al Owais, Chairman, HE Mohammed Ahmed Amin Al Awadi, Director General, Ibrahim Al Jarwan, Director of Economic Relations and Marketing and general coordinator of the campaign, staff members, representatives of the Sharjah Radio and Television Authority, the Department of Economic Development, Sharjah Commerce and Tourism Development Authority, and representatives of major shopping centers in the emirate.

The ceremony kicked of with a speech by HE Abdullah Al Owais, who praised  efforts made by partners from the government and private sectors and the parties supporting the Sharjah Shopping Promotions campaign, and pointed out that organizing this ceremony comes as part of the Chamber’s keenness to strengthen partnerships and cooperation between all governmental and private institutions concerned with economic activity related with various tourism, commercial and financial sectors.

Al Owais reviewed milestones of the campaign and the successes it has achieved in supporting the retail sector in the emirate, stimulating sales and allowing residents to explore and enjoy  all facilities available, exclusive offers and activities that met their expectations.

For his part Mohammed Ahmed Amin Al-Awadi, Director General, expressed his appreciation for all strategic partners for supporting the campaign to achieve happiness and prosperity for citizens and residents, pointing out that the Sharjah Shopping Promotions succeeded in achieving its goals through sales’ revenues amounting to more than Dh600 million.

Ibrahim Rashid Al-Jarwan, Director of Economic Relations and Marketing and general coordinator of the campaign pointed out that the Chamber’s surveys received  positive feedback, with 1800 centers and malls taking part, with indicators confirming this success, with most retail outlets taking advantage of the privileges provided by the Chamber, exemption from fees in the Central and Eastern regions 50% discounts in all other parts of the emirate, leading to increased participation rates and strong competition.