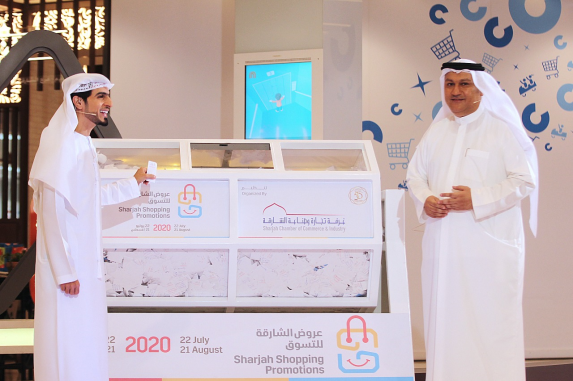 The Sharjah Chamber of Commerce & Industry, SCCI, recently concluded the activities and events of its exceptional promotional campaign “Sharjah Shopping Promotions” which was held from 22 July to 21 August, with the aim of supporting the retail sector and boosting the sales volume, especially in light of Covid-19 crisis.

In a festive atmosphere, City Centre Sharjah hosted the activities of the campaign which was ended with handing out many valuable prizes for the lucky shoppers, through the weekly quiz show “Shopping Promotions” which is broadcast by Sharjah TV.

This week’s winners of the premium car “BMW-X2” were Sheikha Al-Mesafri, Hanadi Al-Obaidli, and Mesbeh Al-Shehi, while Mohammed Al-Oafi and Abdullah Turki won the same prize but through the “Maraya” app. In addition, hundreds of shoppers received AED 5000 gift vouchers and AED 2000 cash prizes, as well as a 2-day hotel stay.

The SCCI said: “Sharjah’s retail sector is extremely satisfied with the remarkable turnout to make the most of the attractive offers and exciting discounts which continued throughout the campaign.”

“The volume of sales surpassed AED 600 million, while fortune smiled on 12 winners of the BMW-X2 cars. The number of the winners of cash prizes reached 250 in addition to handing out gift vouchers worth AED 3 million,” the SCCI pointed out.

Ibrahim Rashid Al Jarwan, Director, SCCI Economic Relations and Marketing and general coordinator, said: “The keenness to organize this exceptional shopping season clearly reflects the SCCI’s commitment to enhance its role in developing Sharjah’s economy and bringing positive momentum for the business sector. We are also committed to pleasing the citizens and residents and visitors as well, as part of our commitment to social responsibility principles and in line with the visions and directives of the wise leadership in light of Covid-19 repercussions on the global economy.”

“The feedback we received about visitors’ turnout and retailers’ satisfaction is very positive. The event has significantly boosted the volume of sales across the emirate, thanks to the participation of about 1800 shopping malls and retail stores,” added Al Jarwan, underlining the SCCI’s determination to launch more innovative initiatives and organize attractive events.

Praising the role of Sharjah Broadcasting Authority and Sharjah TV in the success of the campaign through the weekly quiz show “Shopping Promotions”, Jamal Bu Zinjal, Head of Media Department, SCCI, explained that the Chamber organized various campaigns through the media or social media platforms to promote the event and to introduce the offers and deals to the people.”

Bu Zinjal thanked all the sponsors and supporters from the public and private institutions for their cooperation in making the event successful.