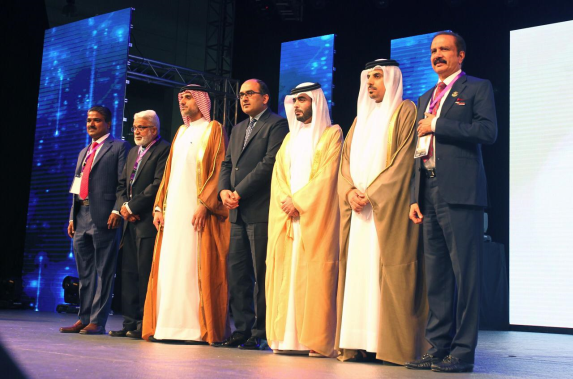 Under the patronage of HH Sheikh Sultan bin Mohammed bin Sultan Al Qasimi, Crown Prince and Deputy Ruler of Sharjah, Sheikh Khaled Bin Abdullah Bin Sultan Al Qasimi, Chairman of the Department of Seaports and Customs, inaugurated the 3rd Kerala trade and culture fest “Come On Kerala 2020” at the Expo Centre Sharjah. With the participation of more than 250 brands and 4000 businessmen, the three-day event is organized by the Sharjah Chamber of Commerce & Industry, SCCI, in collaboration with the Gulf Madhiamam Newspaper. The opening ceremony was attended by HE Waleed Abdul Rahman Bukhatir, Second Vice Chairman of Sharjah Chamber of Commerce & Industry, a number of the SCCI board members, HE Saif Mohammed Al-Midfa, CEO of Expo Centre Sharjah, Jamal Bu Zinjal, Head of Media Department, SCCI, Hamzah Abbas, Editor-in-Chief, Gulf Madhiamam newspaper, diplomats, businessmen, dignitaries and economists in the UAE and India. Following the inauguration, Sheikh Khaled toured the exhibition pavilions, where he was briefed on the exhibition which features a lot of platforms reflecting the agricultural, industrial and tourism investment opportunities provided by the government of Kerala as part of its endeavors to enhance cooperation with the Emirate of Sharjah. “Come on Kerala 2020” is also seeing the participation of major public and private institutions, as well as the accompanying cultural activities, which showcase a variety of programs to exchange ideas and cultures between visitors and exhibitors. Historical Relationships Sheikh Khaled said: “Organizing the “Come on Kerala Show” for the third consecutive year reflects historical relations and mutual cooperation between the Emirate of Sharjah, the Republic of India in general, and the state of Kerala in particular. It also comes as part of joint efforts to enhance the prosperous economic cooperation between the two friendly countries.” He also commended the SCCI’s and Expo Centre’s efforts to provide all the support for the success of this event, which forms valuable opportunity to highlight the Emirate of Sharjah’s pull factors in all sectors, especially tourism, entertainment, and culture, healthcare, logistics and more. Mutual Interests Commenting on the event, Waleed Bukhatir said: “The SCCI’s keenness on organizing the 3rd Come on Kerala, which is held under the patronage of HH Sheikh Sultan bin Mohammed bin Sultan Al Qasimi, Crown Prince and Deputy Ruler of Sharjah, comes as part the Chamber’s efforts to reinforce and develop the economic relationship between the Emirate of Sharjah and the State of Kerala and leverage SCCI’s potentials for the success of all events that help enhance such relations and expand the cooperation in various fields.” “The relations between the UAE and India are historical relations based on firm foundations of mutual respect and common interests in many social, cultural, and particularly economic domain,” The UAE is one of India's largest trading partners in the Middle East, while India is the UAE’s first trading partner, as the value of Emirati direct investments in India reached $ 8 billion, which made the UAE ranked tenth among the largest investors in terms of foreign direct investment. While the volume of the Indian foreign direct investment in the UAE amounted to more than 6.5 billion dollars. This underlines the strength of relations and the extent of their roots, Bukhatir added. A Gateway to the Region's Markets For his part, HE Saif Mohammed Al-Midfa said: “Hosting this event for the third year in a row underlines Sharjah’s status as a gateway to the region’s markets, by providing an opportunity for the Indian business community to meet its Emirati counterparts, as well as promoting competitive advantages and significant investment opportunities available in various economic sectors in Sharjah, through business meetings to be held on the sidelines of the event.” “Come on Kerala Show, which attracted more than 250,000 visitors in the previous two editions, has become one of the important economic, commercial and cultural events hosted by the Emirate of Sharjah, owing to its wide interest from citizens and residents, especially from the Indian community. This exhibition is also a perfect opportunity for Emirati companies wishing to expand their businesses in the Indian market, as well as Indian companies to enhance its presence in the country and regional markets,” Al-Midfa concluded. Various Activities This’s years edition is seeing the launch of Women Excellence Awards, Kerala cuisine festival, and cookery contests. Additionally, Forum will also be organized on the sidelines of the show, providing the opportunity for the SME companies to meet the financial experts, diplomats, and decision-makers, who will present their ideas, experiences and guidance to startups, students and all stakeholders. Also, a workshop entitled “Bosses Day Out” will be exclusively held for business owners and CEOs. You can also meet the Bollywood’s most renowned stars, as part of the various attractive evening cultural programs, in addition to other events that are tailored to suit all family members and simulate Kerala atmosphere, especially the galleries that are designed to reflect Kerala’s most famous places and landmarks. Come on Kerala is open daily from 10 am until 10 pm and entry is free for all activities.