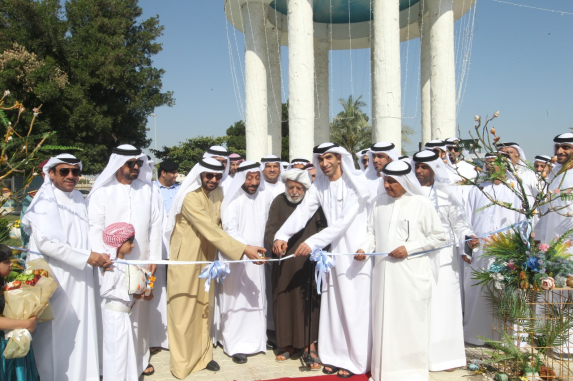 HE Dr. Thani bin Ahmed Al Zeyoudi, the Minister of Climate Change and Environment, inaugurated the 3rd edition of the East Coast Marine Environment Festival which takes place at the Kalba Corniche Park. The three-day event is organized by the Sharjah Chamber of Commerce & Industry, SCCI, in cooperation with Kalba Municipality, Sharjah Marine Sports Club, Kalba Fishermen's Association, Kalba Ladies Club, and the Arab Academy for Science, Technology and Maritime Transport. The event is featuring several live shows, heritage contests, marine, and recreational games, with the participation of many government institutions, private sector companies and dozens of productive families showcasing a wide variety of local products. The opening ceremony was attended by HE Abdullah Sultan Al Owais, Chairman, SCCI, HE Waleed Abdul Rahman Bu Khatir, SCCI’s Second Vice Chairman, a number of the SCCI Board of Directors, HE Dr. Suleiman Abdullah Al Zaabi, Chairman of Kalba Municipal Council, HE Mohammad Ahmed Amin Al-Awadi, SCCI’s Director-General, and Abdul Aziz Shattaf, SCCI’s Assistant General Director, Members Services Sector and Director of Sharjah Exports Development Center Also present were Khalil Muhammad Al Mansoori, Director of the SCCI Branch Management, Sultan Obaid Al Zaabi, Director of SCCI Branch in Kalba, Hassan Al Zaabi, Member of the Board of Directors of Sharjah Marine Sports Club, Dr. Hisham Afifi, Advisor to the President of the Arab Academy for Science, Technology and Maritime Transport and Director of Sharjah Branch, in addition to a number of government departments officials, economic figures, sponsors and media representatives. Following the inauguration, HE Dr. Thani bin Ahmed Al Zeyoudi accompanied by HE Abdullah Sultan Al Owais, toured the festival activities, where he was briefed on the products of productive families, heritage crafts, folk arts, marine activities, and hunting arts. While appreciating the SCCI’s efforts and initiatives to support and enhance the business environment in the Emirate of Sharjah, HE Dr. Thani bin Ahmed Al Zeyoudi said that safeguarding the environment and ensuring the sustainability of its biological diversity is one of the most important priorities of the UAE, especially the marine environment that is closely related to the heritage and history of Emirati society. Al Zeyoudi pointed out that the community activities, such as the East Coast Marine Environment Festival, significantly contribute to enhancing community awareness of the importance of environmental protection and mechanisms and behaviors to preserve and ensure the sustainability of its natural resources and biological diversity in line with the goals of the UAE vision 2021. Highlighting Economic Qualities HE Abdullah Sultan Al Owais said: “The SCCI is always keen on developing the activities of the East Coast Marine Environment Festival in a sustainable way in cooperation with its partners, to serve as an annual milestone that helps boost the economic, commercial and tourist movement, and support the handicraft industries in the city of Kalba and the eastern coast region of the Emirate of Sharjah, and encourage the people of the region to make the best use of This festival. Additionally, such community events highlight the Emirati legacy, through heritage, recreational and cultural events that enhance the feeling of pride in the history of parents and grandparents. In the meantime, these events play a key role in enriching the culture and knowledge information among the festival visitors. “The SCCI, through such events, including Al Dhaid Dates Festival and Salt & Marine Fishing Festival in Dibba Al Hisn, aims to highlight the economic qualities of the various regions of the emirate and shed light on the advantages and opportunities of investment available in these regions, and revitalizing handicrafts and supporting productive families and entrepreneurs in various sectors,” he noted. Expressing his thanks to all authorities which spared no effort in providing the support for the success of this festival, Al Owais underlined that this reflects the keenness of all authorities to join efforts and cooperate for the sake of public interest and the happiness of society. Reflecting the History and Uniqueness of the Region Khalil Muhammad Al Mansoori said: “The two previous editions of the festival have managed to attract more than 20 thousand visitors from different age groups and tourists to the city of Kalba, thanks to the rich cultural and recreational activities that reflect the cultural and heritage aspect of the city and the eastern coast region of the Emirate of Sharjah in general.” He added that the 3rd edition of the festival constitutes an opportunity for families and visitors to get acquainted with the marine life of the eastern coast of the emirate, and enjoy live shows, heritage, and poetic competitions, marine and recreational games, picnic boats, products of productive families, popular cuisine and other attractive activities. Launching the First Fishing Competition The 3rd edition of the festival saw the organization of military shows by students of the Arab Academy for Science, Technology and Maritime Transport in Khor Fakkan. In addition, the first fishing competition has been launched with cash prizes amounting to 150 thousand dirhams. The fishing competition is divided into three categories; the winner will get 50 thousand dirhams on each category. These categories are the largest fishing category, tuna fishing category, and kanad fishing category. The three-day festival also includes organizing a number of live shows for boats and marine heritage equipment, fishing craft shows, its methods and seasons, in addition to daily seminars aimed at raising awareness and increasing the experience of the public and those interested in the fishing profession, where a number of old and experienced fishermen will tell their stories and personal experiences about their craft and the most prominent milestones they went through. The festival also provides a space for merchants to learn more about fish products and their role in reinforcing the folklore from the professions and the traditional marine industries that parents and grandparents lived for decades, as well as providing an opportunity to learn about the products of marine fishing tools and others.