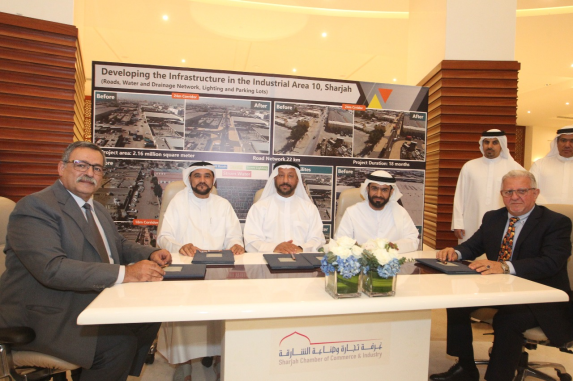 Under the patronage of His Highness Sheikh Dr. Sultan bin Muhammad Al Qasimi, Member of the UAE Supreme Council and Ruler of Sharjah, the Sharjah Chamber of Commerce & Industry, SCCI, in collaboration with the Department of Town Planning & Survey, Sharjah Roads & Transport Authority (SRTA), and Sharjah Water and Electricity Authority (SEWA), has announced the launch of the infrastructure development project for the 10th industrial zone in Sharjah.

The new project is one of the pioneering initiatives with the aim of reconstructing the whole area, providing the best services for the people, and keeping pace with Sharjah’s universal renaissance. This would help promote the Emirate’s competitiveness, develop its economic environment and its investment attractiveness, and enhance its sustainable development.

Under the guidance of His Highness Sheikh Dr. Sultan bin Muhammad Al Qasimi, the facilities located on the project site will get a 50% reduction of service fees throughout the project implementation.

This was stated during the inauguration ceremony of the project which was held today Thursday at the SCCI headquarters, in the presence of HE Abdullah Sultan Al Owais, the SCCI’s Chairman, Engineer Salah Bin Butti Al Muhairi, Adviser to the Department of Town Planning and Survey, Deputy Chairman of the Sharjah Urban Planning Council, HE Dr. Eng. Rashid Al Leem, Chairman, SEWA, HE Eng. Yousef Saleh Al-Suwaiji, Chairman of Sharjah Roads and Transport Authority, HE Waleed AbdelRahman BuKhatir, Second Vice Chairman of the SCCI, a number of Board of Directors, SCCI’s Director-General, HE Mohammad Ahmed Amin Al-Awadi, and media representatives.

The project, according to the implementation contracts, covers an area of 2.16 million square meters, and it will be carried out over 18 months by Sharjah Contracting and Khatib & Alami.

The contract also includes the establishment of a modern and advanced road network, the implementation of a rainwater and lighting network and the rehabilitation of sidewalks and parking lots as per the highest safety and security standards and best international spec

It also stipulates that the companies located on the project site continue to operate, by following the relevant mechanisms.

After unveiling the future vision of the project, HE Abdullah Sultan Al Owais said: “This project reflects the partnership between public and private authorities to scale up the economic sectors in Sharjah through the relevant initiatives and projects, pursuant to the wise vision of His Highness Sheikh Dr. Sultan bin Muhammad Al Qasimi, Member of the UAE Supreme Council and Ruler of Sharjah, in terms of the importance of joint action to enhance the march of economic development and to make the emirate a global icon in various international forums.”

He added: “For several decades now, Sharjah’s industrial sector has received the attention of our wise leadership, in view of its positive contributions to the emirate’s GDP and its economic dimensions to all segments of society. Emirate of Sharjah was and still is marked by the availability of specialized industrial cities for various industrial economic sectors, its geographical location and its proximity to important ports and airports. This made the Emirate a distinguished industrial environment that attracted major international companies and contributed to advancing industrial development.”

“The SCCI is always keen to provide support and assistance programs to the industrial sector and to create an appropriate environment to enhance its role. Our goal is to underline Sharjah’s position as one of the global destinations for industries a gateway to the industrial supply across the Middle East. This is achieved through the SCCI’s constant quest to provide technical means and support that stimulate the private sector and contribute to developing the industrial sector in the Emirate,” he concluded.

For his part, HE Khalid Bin Butti Al Muhairi said: “Emirate of Sharjah is one of the most important industrial centers in the country and in the Gulf region. From this standpoint, this project has been launched, pursuant to the wise vision of His Highness Sheikh Dr. Sultan bin Muhammad Al Qasimi, Member of the Supreme Council and Ruler of Sharjah, in terms of the importance of adopting the innovative concept in the emirate's industrial sector, which is the largest economic sector, accounting for about 17% of its GDP.”

“For this reason, the 10th industrial zone was chosen as a leading project to upgrade and develop its infrastructure facilities to become a model for developing all industrial zone in the emirate. The project idea was met with great enthusiasm by the owners and tenants of industrial lands in the region, and they expressed their willingness to fully cooperate in the implementation of the project,” added Al Muhairi.

He expressed his hope for the successful implementation during the project timeline, so as to be the foundation for other projects in the future to include all industrial and commercial sectors in the Emirate of Sharjah in order to enhance its competitiveness and attractiveness to take its place among all the advanced cities worldwide.

Sharjah’s industrial sector is the largest among the various emirates of the country, where the emirate includes 21 industrial zones accounting for about 45% of the industrial output of the UAE, at a rate of 2800 industrial units.

The products of the industrial sector in the Emirate of Sharjah are diversified to cover all the needs of consumers. This includes; (oil, plastic, furniture, food products, electrical tools, concrete, water pipes, and fabric) and others. All these industries are accredited by international bodies and conform to international specifications and standards