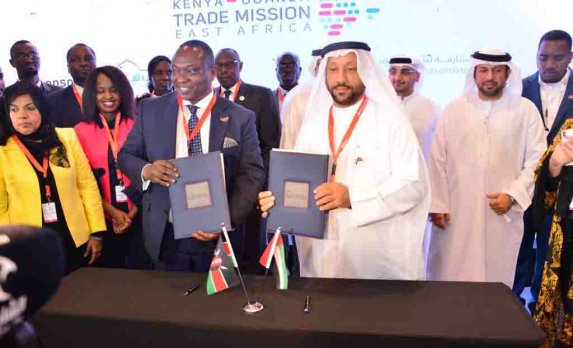 The UAE - Uganda Investment Forum in Kampala had discussed investment cooperation and explored opportunities of marketing local industries in Africa’s most promising markets. The Forum, organised by the Sharjah Chamber of Commerce and Industry, SCCI, represented by the Sharjah Exports Development Centre, SEDC, was held during the SEDC’s three-day visit to Uganda, which was concluded on Friday, following its first stop in the Kenyan capital Nairobi. The SEDC’s visits to Kenyan and Uganda come as part of its fifth trade mission to East of Africa. More than 25 industrial, productive, and export firms from Sharjah took part in the forum, which brought together high-profile guests including government officials, businessmen, and investors. Headed by Abdullah Sultan Al Owais, SCCI’s Chairman, the trade mission held bilateral and business meetings with Ugandan counterparts, to further strengthen relationship with the Ugandan business community. On the side-lines of the forum, Al Owais met a number of Ugandan ministers and heads of economic bodies, including Edward Kiwanuka Ssekandi, Vice President of Uganda, Alex Onzima, Minister of State, Office of the Vice President, and Werikhe Kafabusa, State Minister for Trade. As well as Olive Kigongo, President and CEO of the Uganda National Chamber of Commerce and Industry. He discussed with Ugandan officials ways of promoting the UAE-Uganda business relations and how to boost trade exchange. They also discussed mechanisms of establishing new investment partnerships between Ugandan and Sharjah. Present at the meetings were a number of officials from Sharjah Chamber, Expo Centre Sharjah and SEDC. Addressing the forum, Al Owais stressed that the UAE and Uganda share deeply rooted relations, and that the trade mission to Uganda comes to boost Sharjah’s presence in Africa's most promising markets. "We are willing to increase the volume of trade exchange, economic and investment cooperation with Uganda. We seek to open up new horizons for collaboration between both sides’ businessmen, investors and companies," he said. He added, "The trade missions from and to both countries have played a significant role in pushing our economic ties forwards and contributed largely to expanding our trade exchange. The UAE today is the third largest exporter to Uganda with exports worth US$1.270 billion, while Ugandan exports to the UAE amounted to US$ 428 million." The SCCI’s Chairman invited Uganda’s business community to take part in Sharjah’s year-round exhibitions, conferences and business events. Speaking on behalf of Uganda’s Vice President, Alex Onzima lauded the UAE and Sharjah’s efforts made to bolster ties with Uganda, adding that trade missions exchanged over the past years have yielded many positive outcomes, including increasing the number of Ugandan workforces in the UAE, which reflected positively on the Ugandan economy. Congratulating the UAE’s leadership and its people on the 48th National Day, Onzima hailed the country’s tolerance approach, which is being adopted as a lifestyle and was crowned with the announcement of 2019 as a Year of Tolerance. This reflects how much the UAE is aware of the importance of consolidating the values of peace, moderation and religious pluralism, said the state minister. For his part, Werikhe Kafabusa expressed his county’s pride in the distinguished ties with the UAE, stressing Uganda’s keenness to develop its bilateral relations with Sharjah across many domains, especially in the economic sector. "Sharjah’s trade mission has no doubt taken our economic cooperation into new heights and would definitely enhance our mutual investment and trade exchange," said Uganda’s State Minister for Trade. Meanwhile, Olive Kigongo commended the SCCI’s efforts to develop economic, trade and investment ties with Uganda through dispatching trade missions in recent years, which gave a great momentum to both countries’ ongoing cooperation. "Uganda is very happy to welcome Emirati businessmen and investors and we are committed to offering them incentives and facilities that serve both sides’ interests," she noted. On the last day of the visit, Al Owais received a number of trophies from many Ugandan official bodies, in recognition of Sharjah Chamber’s constant keenness to dispatch trade missions and boost relations with East of Africa.