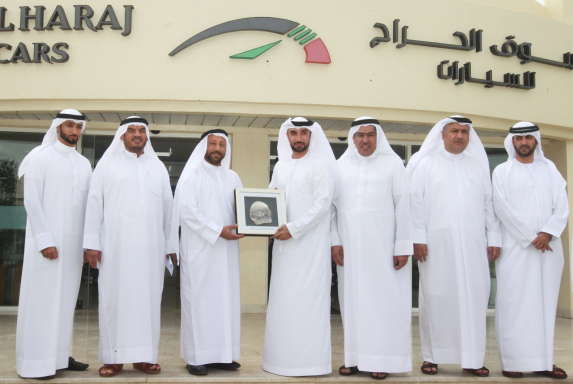 A delegation from the Sharjah Chamber of Commerce & Industry, SCCI, headed by HE Abdullah Sultan Al Owais, SCCI’s Chairman, today Monday visited Souq Al Haraj for pre-owned cars, one of Sharjah Asset Management-run companies. The visit comes as part of the SCCI’s keenness on strengthening coordination and communication with its strategic partners. This would help develop Sharjah’s business environment and boost its status as an investment attraction destination and a key hub for several economic sectors regionally. The delegation included HE Mohammed Rashid Al Dimas and HE Ali Muhammad Al Khayyal, members of the Board of Directors of the SCCI, HE Mohammad Ahmed Amin Al Awadi, SCCI’s Director-General, and Ibrahim Rashid Al Jarwan, Director of SCCI’s Economic Relations and Marketing. The SCCI delegation was received by HE Mohammed bin Essa, Chief Asset Management Officer, Sharjah Asset Management Holding, Ahmed Al Mashrekh, Commercial Director of Sharjah Asset Management and Majed Al Mualla, Manager of Souq Al Haraj for Cars. During the visit, the two sides reviewed means of enhancing cooperation and strategic communication, so as to serve the Emirate of Sharjah’s trends, especially with parties playing a major role in the commercial movement in Sharjah. Addressing Challenges “This visit would help enhance coordination and cooperation between the SCCI and Sharjah Asset Management in general, and the SCCI’s Sectoral Business Group and Souq Al Haraj in particular. It also aims to discuss the possibility of strengthening the role of the buying and selling sectoral business group of the SCCI, owing to its importance in being an entity representing this sector to transfer its reality and ways of developing it to the relevant authorities, in addition to identifying the challenges facing this sector to reinforce its position as an important supportive of the economy in the Emirate,” said HE Abdullah Sultan Al Owais. “The SCCI is keen on organizing such field visits to its strategic partners and affiliated members, with the goal of introducing its work agenda and the efforts made to promote the economic sector,” he underlined. Al Owais highlighted the vital and effective role of the sectoral business groups, which represents the most prominent economic sectors in the emirate, in supporting the SCCI’s role towards serving the business community. Driving Economic Growth HE Mohammed bin Essa, Chief Asset Management Officer, Sharjah Asset Management Holding (SAMH), reaffirmed SAMH’s eagerness to communicate constantly with public and private entities concerned with the auto trade sector. “We are always looking for the best ways, practices and mechanisms that would support auto sector’s growth to enhance the confidence of existing, new and potential investors, and thus driving the emirate's economic growth. Bin Essa stressed that Souq Al Haraj in Sharjah is equipped with all modern technologies, where it was recently provided with more than 85 advanced surveillance cameras to monitor traffic and automatically identify the license plate numbers. Supporting the Private Sector HE Mohammad Ahmed Amin Al Awadi emphasized the SCCI’s keenness on highlighting its exerted efforts in bolstering the private sector, through the services and facilities provided to its members and its role in strengthening their relationship with local and federal economic authorities, as that would help develop their business and commercial and industrial activities. “Also, these field visits aim at highlighting the essential role of the sectoral business groups in reinforcing ties between government and private sectors and creating representative committees for each economic sector to set its own vision in terms of developing and strengthening it,” he concluded. Constructive Visit HE Abdullah Sultan Al Owais toured a number of car showrooms, where he was briefed on the operation of the Souq and its latest development. He also met with car dealers and owners of service offices and listened to their views and observations on the mechanism of work and the movement of buying and selling, as well as reviewing their requirements and proposals. Those, in turn, commended this fruitful visit, which obviously reflects the true responsibility and constructive cooperation in the success of the business of merchants and companies operating in the Souq. This visit is one of a series of visits by the SCCI’s Economic Relations Department, aimed at enhancing coordination and communication with strategic partners on economic affairs in the emirate to serve economic facilities of all categories. Developed at a cost of AED250 million, the first phase occupies an area of more than three million square feet, with two more phases scheduled for construction – subject to future demand. Souq Al Haraj currently consists of 415 showrooms and 70 shops for selling spare parts and automotive accessories, in addition to 5000 parking lots and car exhibition areas and auction spaces. Souq Al Haraj offers a wide range of facilities including car selling, buying, insurance, registration and banking services, in addition restaurants and exchange shops that meet all the needs of visitors.