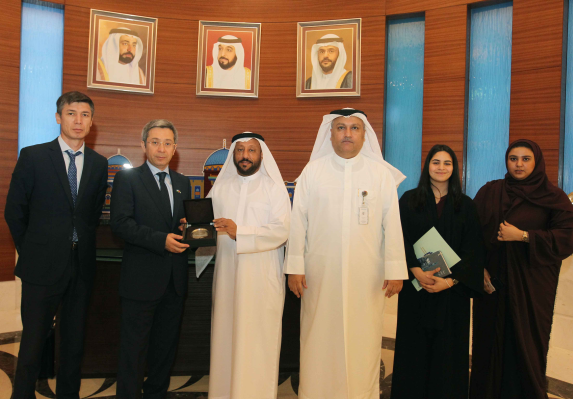 The Sharjah Chamber of Commerce & Industry (SCCI) received two high-ranking diplomatic delegations from South Africa and Uzbekistan to discuss Sharjah’s most important investment advantages, develop and reinforce economic and trade relations, and to learn closely about investment cooperation opportunities and trade exchange between the business communities in both sides. In this context, HE Abdullah Sultan Al Owais, Chairman, Sharjah Chamber of Commerce and Industry, met with HE Saad Cachalia, Ambassador of South Africa to the UAE. The meeting discussed prospects of cooperation and partnership to enhance the mutual investment and to build the foundations for the future business between the economic events in both Sharjah and South Africa. The meeting was attended by HE Mohammad Ahmed Amin Al Awadi, SCCI’s Director-General. Important Opportunity Commenting on the meeting, HE Abdullah Sultan Al Owais said: “This meeting is an important opportunity to further develop the strategic ties between both sides in various sectors and to establish new ventures that would help enhance our joint endeavors to bolster the economic growth in both countries.” He further added: “This meeting also constitutes an important platform for investors and businessmen in South Africa to learn about the Emirate of Sharjah’s investment climate and establish firm economic relations that bolster trade exchange and economic cooperation between the two friendly countries.” Al Owais called on South Africa’s investors and businessmen to communicate with Sharjah’s official authorities and their Emirati businessmen counterparts to establish joint ventures, as well as to take part in the economic exhibitions the Emirate of Sharjah hosts and organizes throughout the year. This would help South African businessmen and investors to get acquainted with Sharjah’s business community and to explore the distinguished opportunities and the facilities given to the foreign investors in Sharjah. The Ambassador of South Africa to the UAE, HE Saad Cachalia said that the opportunities for cooperation between the two countries are numerous and diverse, noting that South Africa pays great attention to enhance cooperation ties and trade exchange with the Emirate of Sharjah, so as to serve the interest of both sides. Cachalia expressed his admiration and appreciation for the modern renaissance of the UAE in general and the Emirate of Sharjah in particular, calling on the SCCI to visit South Africa and hold face-to-face meetings with the officials of South Africa Chambers of Commerce. After the meeting, HE Abdullah Sultan Al Owais accompanied the visiting delegation on a tour of the permanent exhibition of locally manufactured products located at the SCCI headquarters, where they reviewed a wide range of products that are manufactured locally by more than 180 firms and are exhibited through 191 stands. Economic and trade relations between the UAE and South Africa have witnessed significant developments over the last three years. The value of non-oil trade between the two countries increased from AED 9.3 billion in 2016 to AED 14.1 billion in 2018 with a growth rate of 51.6%. Uzbekistan ... Promising Investment Opportunities In the same context, HE Abdullah Sultan Al Owais met with HE Bakhtiyor Ibragimov, Ambassador of the Republic of Uzbekistan to the UAE, with the attendance of HE Mohammad Ahmed Amin Al Awadi, SCCI’s Director-General. The meeting reviewed Sharjah’s most important economic competitive factors. The two sides also discussed the necessity of cooperation in the tourism, industrial and agricultural sectors. Furthermore, the meeting discussed a number of issues of common interest, which contribute to the development of trade, investment, and industrial cooperation between Sharjah and Uzbekistan with a view to realizing the aspirations of the private sector on each side. The attendees stressed the need to organize several bilateral meetings and open channels of direct communication between the businessmen of the two sides to increase trade exchange. In particular, that the indicators of the current trade volume show the availability of promising investment opportunities with the possibility of increasing them significantly in the future, given the various economic components in the industrial, agricultural and tourism sectors. Non-oil trade between the UAE and Uzbekistan recorded significant growth during the last year, while non-oil exports recorded a significant jump to AED 500 million. The meeting concluded with exchanging shields and souvenirs. The attendees pointed to the importance of the meeting as a nucleus for broader economic cooperation between the Emirate of Sharjah and Uzbekistan.