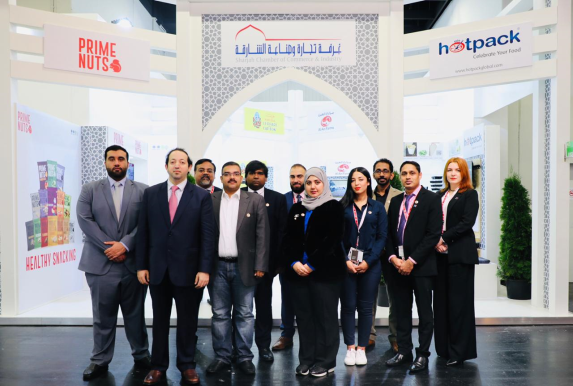 The Sharjah Chamber of Commerce and Industry (SCCI), represented by the Sharjah Exports Development Center (SEDC), has concluded its participation in Anuga (the world’s largest trade fair for food and beverages) which took place in Cologne, Germany. Anuga is the most important industry meeting point with over 7400 exhibitors from 107 countries. With the aim of bolstering and promoting the national food exports, the SCCI’s platform included the Hamriyah Free Zone Authority (HFZA) and a considerable number of representatives of national companies for food industries. A number of key areas have been reviewed by the SCCI including; the investment opportunities available at the foodstuff industry sector in Sharjah and the competitive advantages and incentives provided by the Emirate for foreign investors, which help them establish their businesses easily in a safe and stable economic environment, thus achieving the best revenues and expansion in other markets of the region. The SCCI delegation comprised Maha Al Zarooni, Senior Export Services and Market Management Executive, Ali Al Jari, Senior International Exhibitions Executive and a number of SCCI employees. Bolstering Exports Development HE Mohammad Ahmed Amin Al Awadi, SCCI’s Director-General, said: “The SCCI is keen on taking part in such international events and exhibitions to highlight the domestic products and review the cooperation mechanisms with all stakeholders. This would help bolster the Emirate of Sharjah’s exports to all countries of the world.” “The SCCI’s participation in this important event reflects the Chamber’s strategy to highlight the capabilities and qualities of the UAE’s business sector which is characterized by its economic and commercial openness to the whole world and its motivational business environment,” added Al Awadi. He further said: “Our participation primarily aimed at promoting the Emirati industrial products, exchanging knowledge and experiences, learning more about the best practices and opening new markets to enhance trade exchange between the UAE and other countries of the world.” Successful Participation While underlining the success of HFZA and SCCI in representing the Emirate of Sharjah, H.E. Saud Salim Al Mazrouei, Director of Hamriyah Free Zone Authority (HFZA) and Sharjah Airport Free Zone (Saif Zone) said that HFZA took part in this trade fair to promote the Sharjah Food Park Complex – Food Park, introduce investors to Sharjah’s competitive advantages, and identify the needs of the businessmen and foodstuff sector companies. “HFZA’s facilities and strategic location have become an important goal for the multinational companies that look forward to expanding its operations in the region, thanks to the easy access to all clients in the various continents,” added Al Mazrouei. Support by 30% Commending the outcomes of SCCI’s participation in Anuga, Abdul Aziz Shattaf, SCCI’s Assistant General Director, Members Services Sector and Director of SEDC said: “The SEDC’s participation is part of its Participation Abroad Program and the keenness to open new exporting markets for SCCI members to access new importers, investors and partners for their business in Sharjah. This would help expand the spread of Emirati products in world markets.” He added that 30% of the participation costs were provided by the SEDC to support and motivate companies to attend and promote their products, noting that the SCCI’s platform has provided a lot of promising opportunities for the participating companies. This would pave the way for several rewarding future partnerships. Appreciation Praising SCCI’s efforts to bolster local business communities, a number of Emirati companies’ representatives emphasized the importance of participation and its fruitful outcomes, underscoring their keenness to take part in the SEDC’s periodic missions to increase their investments and strengthen their presence in the foreign markets.