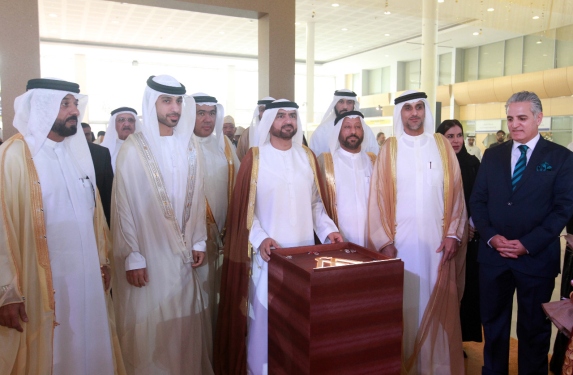 With over 500 participating exhibitors and leading brands from Gem & Jewellery Industry, the 47th Watch & Jewellery Middle East Show, the largest and longest running event of its kind, opened with a fantastic five-day run at Expo Centre Sharjah. H. H. Sheikh Abdullah bin Salem bin Sultan Al Qasimi Deputy Ruler of Sharjah, inaugurated the bi-annual event, which is being organized and hosted by Expo Centre Sharjah, with the support of Sharjah Chamber of Commerce and Industry (SCCI). Held under the patronage of His Highness Dr. Sheikh Sultan bin Mohammed Al Qasimi, Supreme Council Member and Ruler of Sharjah, the exhibition will showcase the season’s most exquisite and intricately crafted jewellery creations and luxurious watches, over an area of 30,000 square metres, making it one of the Middle East’s largest shows in terms of occupied exhibition space. Sheikh Abdullah toured the exhibition pavilions and was introduced to the latest regional and global developments and exhibits in the watches and jewellery sector. Accompanying Sheikh Abdullah to the show were H.E. Abdullah Sultan Al Owais, Chairman of SCCI and Expo Centre Sharjah, and H.E. Saif Mohammed Al Midfa, CEO of Expo Centre Sharjah, as well as other SCCI’s board members. While meeting with a number of exhibitors and officials of the national pavilions participating at the show, Sheikh Abdullah expressed his satisfaction with the event’s success in attracting new exhibitors and participants. Sheikh Abdullah went on to view the most diamonds set in one ring, holder of the Guinness World Record, which is being studded with an astounding 7,777 pieces of round, brilliant-cut natural diamonds. He then visited a number of national pavilions, such as Hong Kong, Italy, Japan, Singapore and Thailand, along with some of the leading countries in this industry including Bahrain, Brazil, Saudi Arabia, Turkey, Lebanon, Lithuania, Pakistan, the United States and the United Kingdom. The Deputy Ruler of Sharjah also stopped by Salem Al Shueibi Jewellery stand, the platinum sponsor of the event, and visited the Emirati Designers pavilion, featuring some of top Emirati designers, showcasing their latest innovative collections of gold and diamond. Outstanding success Hailing Expo Centre Sharjah’s success in organizing the event twice a year over, Sheikh Abdullah stressed that the outstanding success achieved by every edition is a manifestation of the trust that leading global watchmakers and jewellery designers place in the show. He also praised the organizers of the event and its excellent services, which reflects Sharjah’s keenness to enhance its reputation and position as a global hub for doing business and making investments in all sectors. Perfect opportunity for businessmen H.E. Abdullah Al Owais reaffirmed that the Watch& Jewellery Middle East Show has become one of the most prominent exhibitions in the UAE, providing a perfect opportunity for businessmen to close deals, build successful partnerships and do business, thanks to the UAE being a significant business gateway that links producing countries, with major manufacturers of jewellery and the largest consumer markets in the world. According to the Federal Customs Authority, the UAE’s trade in gold and precious stones grew significantly in recent years, and the sector’s annual foreign trade value is estimated at some Dhs.400 billion. The country’s exports of gold was valued at Dhs.75.9 billion, and its re-exports at Dh26 billion, he added. Advancing Sharjah’s economy For his part, H.E. Saif Al Midfa said: “The show has progressed to become the region’s most important platform for top watch-makers and jewellery designers from around the world and the Emirate’s flagship business event that supports and stimulates the tourism sector. The Expo Centre Sharjah is very keen to play a pivotal role in prospering the jewellery industry in the emirate, which has won the globe’s confidence for gold standards. The UAE accounts for about 14% of the world's gold trade and 20 % of world sales of precious metals” Al Midfa added. A must visit show He stated that the show is s a must visit for gem hunters and enthusiasts as it showcases the most stylish and exquisite designs of jewellery, gemstones, diamonds and watches produced by renowned designers. The event is expected to yield in outstanding results for both exhibitors and jewellery dealers and attract an impressive turnout similar to the previous edition, which is expected to witness over 60,000 visitors.