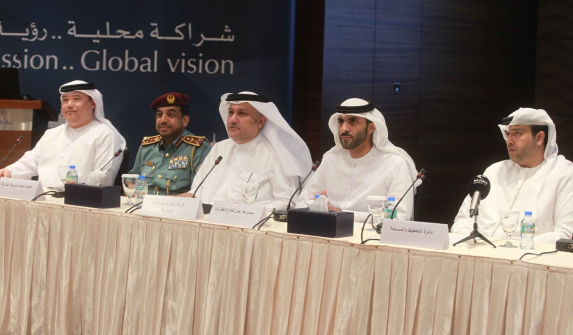 The Sharjah Chamber of Commerce and Industry (SCCI) held a press conference to unveil the details of the “Noor of Sharjah”, a community initiative, launched by Sharjah Police to illuminate dark streets in a number of neighbourhoods in Sharjah, a move that aims to enhance security, reduce crime rates and strengthen positive interaction between public and private sectors. The community initiative was launched in collaboration with SCCI, Sharjah Electricity and Water Authority (SEWA), Sharjah Municipality, Department of Town Planning and Survey, and SCCI’s Committee of the Real Estate Sector Business Group. The aim of the initiative, which has social, security, economic and national dimensions, is to illuminate a number of dark neighborhoods and streets to ensure public safety, crime prevention, and public-private interaction to launch initiatives that serve the community. The conference was attended by His Excellency Mohammed Ahmed Amin Al Awadhi, Director General of SCCI, Brigadier Mohammed Rashid Bayat, Director General of Police Operations at Sharjah Police, Mohammed Abdullah, Director of Excellence Department at SEWA, and Eng. Humaidi Al Ketbi, Director of Building Licensing at Department of Town Planning and Survey. Attending also were Saeed Ghanem Al Suwaidi, Chairman of SCCI’s Committee of the Real Estate Sector Business Group, a number of SCCI’s employees, partners and representatives of private companies. An exhibition was held alongside the conference, where companies have showcased their products to be used through the implementation of the initiative. In a welcome speech, His Excellency Mohammed Ahmed Amin Al Awadhi, Director General of SCCI, stressed that the initiative aligns with SCCI’s constant eagerness to activate joint action to launch qualitative initiatives that contribute to serving the community in general. This is in addition that the "Noor of Sharjah", initiative aims to illuminate dark neighbourhoods and a number of streets, to ensure that community members feel more safe and secure. He noted that the initiative also aims to cut crime rates across the emirate, and to fulfill the business community’s aspirations, especially as it targets several streets in industrial areas in the emirate, thereby contributing to enhancing stability and security in all economic, industrial and commercial sectors in the Emirate. Al Awadhi added: “SCCI has sought to make this initiative a success by making all possible ways to encourage companies to interact with the initiative, whether through implementation or providing care and financial support, in order to enhance the values of corporate community responsibility.” He noted that the initiative also reflects the partnership between all community sectors to implement initiatives that help boost the safety and security of the emirate’s residents, leading up to achieving the requirements of the UAE National Agenda as represented in the indicator of the sense of security. Brigadier Mohammed Rashid Bayat expressed his pleasure with the launch of such as community initiative, which aims to enhance public safety and security, which is a key goal sought by the Ministry of Interior. He noted that the lightening of the emirate’s dark streets and neighbourhoods follows the results of the survey and questionnaire conducted on a large segment of citizens and residents in the emirate of Sharjah. Brig. Bayat indicated that Al Nahda will be one of the first neighbourhoods to be illuminated and then the rest of the neighborhoods in the emirate. Al Nahda was selected by Sharjah Police as part of the “Safe Neighbourhood” initiative, launched recently to intensify efforts in order to increase the sense of safety and security and reduce crime rate.” Mohammed Abdullah, Director of Excellence Department at SEWA, stressed that SWEA will play a key and effective role in this community initiative, by providing innovative lighting in cooperation with its strategic partners in accordance with the best international standards and specifications to provide innovative solutions and with the least costs. He pointed out that the most of the streets and neighborhoods in the emirate are well illuminated, but through this initiative we will use clean energy and the most advanced and energy-saving lighting. Mohammed Abdullah called on all companies that have experience in this field to provide support to achieve the initiative’s goals. Humaidi Al Ketbi, Director of Building Licensing at Department of Town Planning and Survey, said the “Noor of Sharjah” initiative is in line with the department’s vision that aims to create innovative urban planning to ensure a sustainable environment in Sharjah. He remarked that the department has rapidly responded to the call and provided all the possible support it can, by making lists of target buildings and preparing blueprints and plans related to lighting and camera in coordination with Sharjah Police. Saeed Ghamem Al Suwaidi underlined the importance of the initiative in motivating and encouraging investors in the real estate sector. This is mainly because security is one of the most important factors that support development and investment. Al Suwaidi praised the efforts of all bodies sponsoring the initiative, which enhances the values of corporate special responsibility, and expressed his department’s willingness to provide all forms of support for the implementation of the initiative.