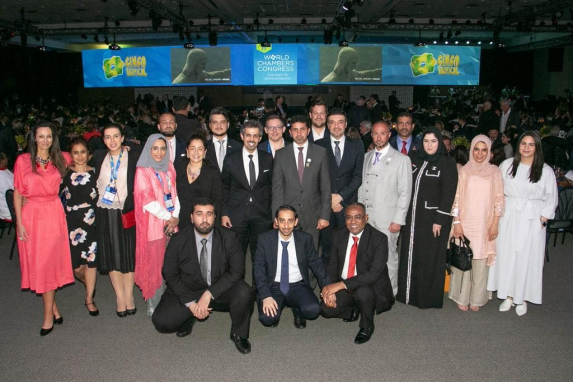 The Sharjah Chamber of Commerce & Industry (SCCI) concluded its participation in the 11th edition of the World Chamber Congress (WCC), held in Rio De Janeiro, Brazil on June 12 – 14. Under the theme “Creating a Shared Future”, the event was attended by 1200 participants from more than 100 countries around the globe. The SCCI’s delegation comprised Maryam Saif Al Shamsi Assistant General Director, Support Services Sector and Abdul Aziz Shattaf, Assistant General Director, Members Services Sector, Fatima Khalifa Al Maqrab, Head of International Cooperation Department, Omar Ali Saleh, Economic Advisor to the Chamber, Sara Al Yahya, Executive Director of International Cooperation and Ali Al Jarri, an international exhibitions executive. The SCCI’s pavilion witnessed heavy turnout by the participants who were briefed on the services, facilities, and initiatives provided by the Chamber to the business community and the available investment opportunities in Sharjah’s various economic sectors. A Valuable Chance for Knowledge Exchange Maryam Saif Al Shamsi Assistant General Director, Support Services Sector, said: “This Congress, which is organized by the International Chamber of Commerce (ICC), is a unique international gathering and a precious chance for sharing distinguished ideas and practices.” “This is the SCCI’s sixth participation in a row at the Congress, in addition to be the golden sponsor of this global event which is a one-of-its-kind that comprises the heads of chambers of commerce around the world,” he noted. She pointed out that SCCI’s delegation was keen on taking part in the entire official and specialized congress sessions, most notably, the session which highlighted the Blockchain topic. In this session, the delegation showcased the UAE’s efforts of utilizing the Blockchain technology in simplifying the business environment and the SCCI’s endeavors to adopt this technology soon to serve the business sector. Also, SCCI held fruitful meetings with several international delegations at the congress. These meetings aimed at strengthening communication and building relationships with the participating chambers across the world. From her side, Fatima Khalifa Al Maqrab, Head of International Cooperation Department said: “The meetings also were an opportune chance to promote the Emirate of Sharjah in general, in addition to highlighting the SCCI investment activities and shedding more light on the facilities provided by the Chamber to foreigner businessmen and investors, so as to reinforce Sharjah’s stature as a vital commercial and investment hub across the region and the world alike”. The Congress addressed a wide range of timely topics and issues such as smart cities, the discussion of building fair and transparent markets for all, the growing role of business leaders in leading transformation and innovation, the Sustainable Development Goals and climate change, rethinking education and skills for the global economy of the future. Furthermore, the Congress reviewed the mechanisms of settling trade disputes, Blockchain technology, chambers of commerce initiatives to bolster micro, small and medium-sized enterprises, the ATA Carnet and E-Commerce. A special focus was also given to the role of chambers of commerce in encouraging the private sector investment in infrastructure projects, the future of trade documents and certificates of origin, digital transformation, facilities provided to the emerging ventures and other topics that uphold the world economy and its competitiveness.