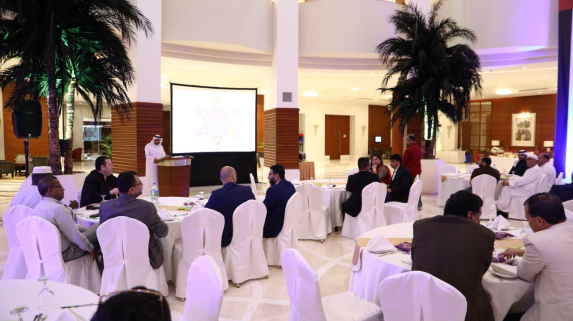 The Sharjah Chamber of Commerce and Industry, SCCI, has launched a new initiative on fostering dialogue and partnership among the private sector’s representatives in certain sectors in the emirate of Sharjah. The initiative was inaugurated during a meeting attended by more than 30 companies which included those from food processing and the food trade sector. This new initiative will feature holding regular business meetings, through which the SCCI will gather specialised companies in certain trade activity, in addition to other companies which specialize in purchasing and exporting the products of those companies. This step will have a positive impact including the encouragement of local products, facilitation of partnerships between the concerned companies, as well as support for the private sector and learning more about its visions and recommendations in terms of developing and enhancing the competitiveness of the private sector. In his speech during the meeting, Abdulaziz Shattaf, Assistant Director-General for Member Services at the SCCI, pointed out that the new initiative is a significant step forward towards the launching of a serious and effective dialogue with the various components of the private sector, especially in its fields of expertise. He believed that the initiative was had been kicked off at an appropriate time to serve the entire economic sector in the Emirate of Sharjah. He said, "The food processing sector has been selected, as the first sector in this initiative, due to the key role it plays in pushing forward Sharjah’s economic growth and the existence of a large number of working companies in this sector whether in food production or foodstuff retail market." "The meeting allows the SCCI to learn closely about the private sector’s proposals and its development opportunities, besides finding the ideal method, through which the SCCI would help private sector companies to develop their business," Shattaf further added. The participants hailed the initiative and its timing, noting that it clearly showed the Sharjah Chamber’s keenness in enhancing the investment environment in the emirate and giving a hearing to the diverse components of the private sector. The participants also believed that such meetings would help support their business, through the formation of cooperative relationships.