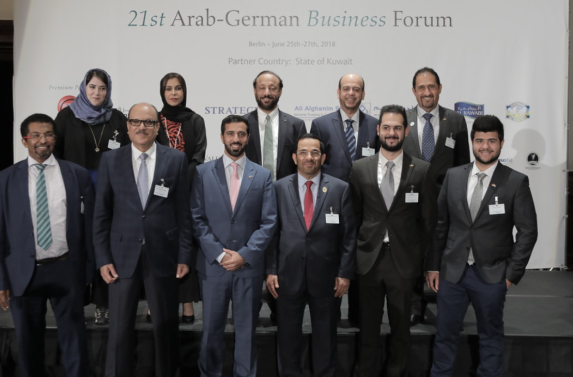 The Sharjah Chamber of Commerce and Industry (SCCI) took part in the 21st Arab-German Business Forum that was held in Berlin during June 26-27. The SCCI was represented at the forum by a delegation, which was headed by H.E Abdallah Sultan Al Owais, Chairman of the SCCI. At the forum, the SCCI held discussions with a variety of participating German and Arab bodies on developing stronger economic relationships, enhancing cooperation and investment opportunities, and exchanging knowledge and expertise between Sharjah and the various German sectors and participating countries. The forum was attended by more than 600 Arab and German businesspeople, specialists and political and economic decision makers. The forum included the official participation of His Highness Sheikh Jaber Al Mubarak Al Hamad Al Sabah, Prime Minister of the State of Kuwait, who was the guest of honour at the forum. The forum also included the participation of high level officials such as H.E. Peter Altmaier, Federal Minister of Ministry for Economic Affairs and Energy in Germany; and Dr. Volker Treier, Deputy Chief Executive Officer for the Association of German Chambers of Commerce and Industry (DIHK) in Germany. The participation of H.E Abdallah Sultan Al Owais, Chairman of the SCCI, also came in consideration of his role as a member of the board of directors for the Arab-German Chamber of Commerce and Industry. The SCCI delegation also included Raghda Hamad Omran Taryam, Board Member at the SCCI; and Fatema Khalifa Al Muqarrab, Head of International Cooperation at the Sharjah Chamber of Commerce & Industry. H.E Abdallah Sultan Al Owais, Chairman of the SCCI, stated that the Sharjah Chamber is keen to participate in the future editions of the forum, and emphasized the importance of building economic relations between the Arab countries and Germany. He remarked that German investments in Arab countries remain limited, and that the Sharjah Chamber is working with its Arab and German counterparts to strengthen German investments in Arab countries. Al Owais added that the SCCI’s delegation have concentrated their efforts on encouraging both German officials and the German business community to forge relationships with Sharjah’s business community and to invest in the Emirate, in order to take advantage of its strategic location, flexible legislation, advanced infrastructure and the attractive features and services that are provided by the Chamber and various government entities in the emirate to the private sector. The forum included the organization of six panels with varying topics: "Direct Investments & Know-How Transfer: Supporting the Industrialization Plans in the Arab World", "Managing the Digital Transformation: Challenges & Opportunities of Disruptive Change" and "Infrastructure Megaprojects: Government as an Enabler for Inclusive Growth", "Food Industry: Building Partnerships for Sustainable Agriculture and Food Security", "Shared Responsibility for Inclusive Development: Perspectives of Arab-German Cooperation, Political & Economic Challenges " and "The State of Kuwait: Sustainable Development and Growth". The volume of Arab investments in Germany have exceeded 100 billion Euros, which makes the Arab countries some of the biggest investors in the German economy. Furthermore, the volume of trade exchange between the Arab countries and Germany has reached 50 billion euros per year, which exceeds the volume of trade exchange between both Germany and Africa and Germany and South America.